Well, good mornings out dere in Blogville.
Dat was quite a banquet over da weekend.
I eated so much food......tacos, pizza, bbq,
cheesy toes, KFC, you names it......I ate's it!
And I won't evens tell you's all da stuffs I
was drinkin'...cept dat I sure has a big
HEADACHE
todays.  Dis is a good week for sleepin' and
I is goin' to do jus' that when I finish up wit
dis postee.
Sees my RED eyeballs...dat ain't da fault of
da flashy beast! 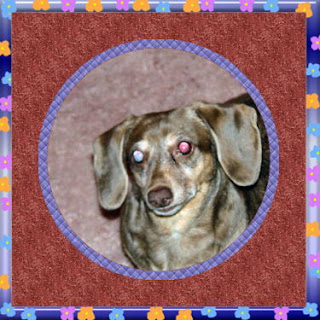 I lets Mom take it from here (butt only for a few minutes)
********
﻿Good morning everyone....what ever has my little Amber done to herself?  She's walkin' around here this morning like a drunken sailor.  And the tootin'.....we won't get into that.
Anyway, today we'll introduce you to
HOLLY.
As mentioned in our last post, Holly is one of Bailey's daughters from a litter of nine puppies born on November 5, 2000, making her just over 10 years old.  She is a Jack Russell Terrier and looks very much like her father, Jack (who is now at Rainbow Bridge).
Holly and her sister, Sarah, were given to us as a Christmas present by our daughter that year. 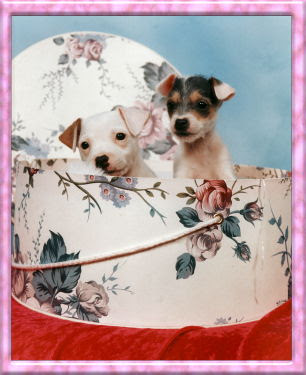 Holly and her sister have always been very close...two peas in a pod is a good way to describe them, much like Amber and Max.  They are definitely not the norm when it comes down to the Jack Russell breed.  They both prefer to be couch potatoes and watch the action from the sidelines.
Today I'll focus on Holly and leave Sarah for our next post.
Holly is rather the "prim and proper" lady of the house.  (Except when she chooses to roll in some smelly stuff in the back yard.) 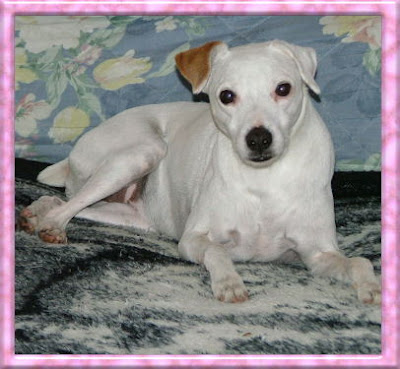 She has a short, smooth coat (as opposed to the shaggy coats of her mother and sisters).
She is solid white with just one brown ear.
And speaking of ears, she is prone to the
"Cauliflower Ear"
(Did you hear that, Thunder, from the OP Pack!!)
This picture was taken during a flareup a couple of years ago.
We were fortunate that this time around we were able to cure it with antibiotics and a lot of flushing. 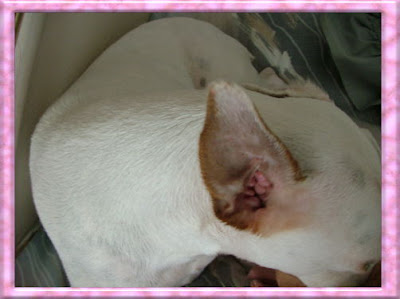 The first time we were faced with this problem, we weren't as lucky.
The "cauliflower" went deep into her ear canal.  She had to have surgery but there was extensive damage in her ear.  Ultimately the flap to her ear was sewn shut and her ear canal opening was relocated to the side of her head and appears as a small hole.  It looks very strange, indeed, but at least her hearing wasn't affected.  When someone says "you have a hole in your head", they aren't kidding. 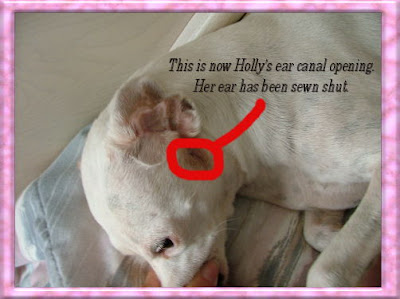 (Hope none of you were eating while reading this as it does sound a bit gross)
Here are a few additional pictures of our "quiet" girl. 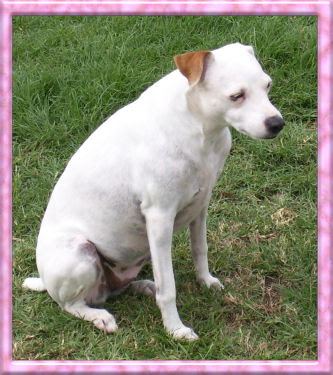 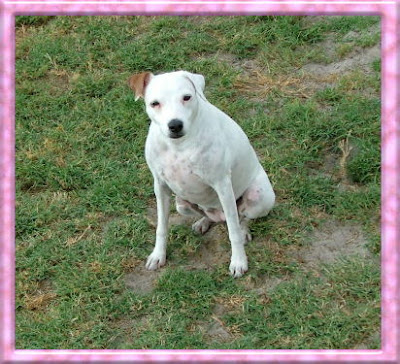 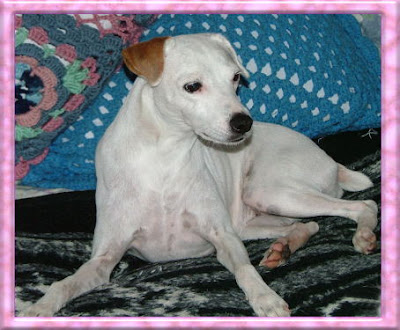 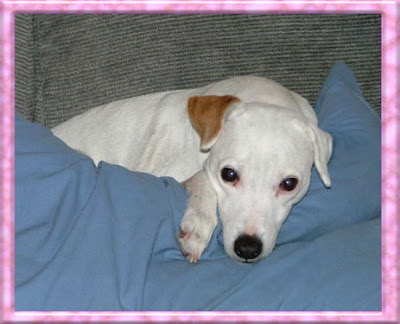 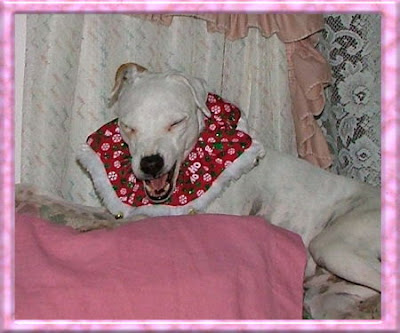 Back to Amber now..
(Hey, wake up!)
*
*
*
*
*
Oh...is I back?  I means...I is back!
(Oh, whatever)
Don't forgets to go HERE to visits da
auction for Richie and Ronnii.
We has a handmade "crocheted by Mom" afghan thingy in da auction dat is specially endorsed by me...
AMBER DaWEENIE 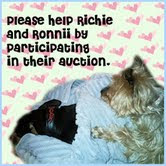 Also, stops by to sees my dear weenie friend...none odder den FRANKIE FURTER... to gets da details bout helping our friends wit green papers by getting a ticket to a raffle.
Dat's All Folks
Now I really has to recuperate from my
pawty hangovers!
SO
*
*
*
*
GOOD NIGHT EVERYONES
AND HAPPY MONDAY
(but I'll be sleepin') 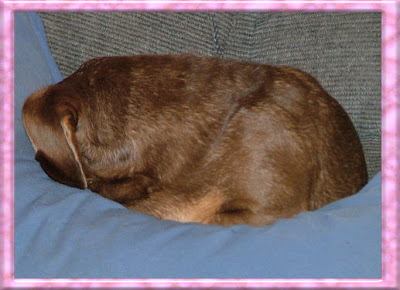 Wow Amber you sure have alot of dogs in your pack. Do you have any kitties too?

Oh Holly, you are such a pretty gal, and I love that brown ear!!!

We are so enjoying meeting all of your pack's pups. Holly is very pretty. She reminds Mom of her little Shadow. We will have to post pics of her one day - the faces are very similar. Thunder was listening intently about that cauliflower ear thingie and hopes he never has to have ear problems again.

Have a great week.

Amber mum is the word don't you worry I won't tell your mom that you were dancing on the tables and shaking your booty at the party...MOL Madi

Holly I just love your brown ear....how cute it is your beauty mark,
Hugs Madi

Holly's a beautiful little gal! Too bad about her ear having to be sewn shut and a weird opening being made, but at least she still has her hearing and a family that loves her!!

Amber, we hope you recover from your hangover soon...and that tooting problem...!

Hi Holly... I like to roll on YARD PERFUME too.. Nothin wrong with that!! Nice to meet you. Sorry about your ear thingy... butt your furs cover it all just fine(burrrrp) Oooops sorry I am having (Tooooooooot) some Indigestion troubles.

I am sooooo glad that you enjoyed the Pawty... THANKS fur EVERYTHINGY!!! Say Hi to Amber.

Hello, Holly. It's good to meet you. And nice of Amber to let you star in today's post while she recuper ... uh, snoozes.

Whew...dat was some pawty and OMD, my head! I so glads you had a most wonderful time!

Now, I has nevers heard of dat collie-flower thing until Thunder had it. But dang, Ms. Holly had a doozzy of one. And then to has her ear sewn shut! Why I do declares, nevr heard of dat eithers. Her is so lucky to has ya'll and lucky hers can still hears. Her is very purties.

Hi Miss Holly! You are very pretty, and we love your brown ear, too! Amber, it is so nice of you to introduce us to all of your pack members. You are very generous to share your blog time with them. We never forget who is the STAR though!!

And Holly -- I just rolled in some "yard perfume" yesterday on my hike with Mom! BOL!!

It sounds like you had a good time at the banquet. I told Mom that I wanted to go too but she said not this time. And something along the lines of being too busy this weekend.

Miss Holly is awfully pretty. I can't believe that all those veggie things are going around to everyone. I think my Mom will be cleaning her ears more regularly so that nothing grows in there. You have a huge pack at your house, my mom would be thrilled. Her parents not so much hee hee.

Nice to meet everyone! Great pics! You should be tired Amber....I saw you at the party....WOW!

Holly is a cutie pie! Glad her ear got all fixed up :) Very sweet of you, Amber, to share your blog today.

You are a beauty! Your poor ear ...I am so glad it is better now.

Thank you fow that intwoduction to youw sissie Holly
She is a bootiful giwl (tell hew the hole is hawdly noticeable) and I love that bwown eaw on hew pwistine whiteness.
She looks like a weal sweetie.
smoochie kisses and Ambew, I hope youw headache goes away(don't tell anyone, but I have one too)
smoochie kisses
ASTA

Oh Amber, there are just too many cutie pies over at your house! We love getting to meet everydoggy!

Heya Amber, nice to meet you & the gang! My name is Amber too & I am from Malaysia. You have a great blog & it sounds like you had a pawsome time at the Banquet too!

P/S: Can I add your blog link to my friend's list? I love making new friends!

Hiya!
This is Balloo, the baby. Big sister aria and I are very sad we missed the pawty, but we were doing that moving thingy with the weird smelling paper crate thingies. We are having fun meeting your beeeeeautiful famileee.
I was reading over Aria's shoulder when she was typing at the 'puter thingy and I saw you need a boyfriend. I don't know what a boyfriend is, but I was thinking I would make a good boyfriend-I am a greeeeeat cuddler and age doesn't matter to me.
Love,
Balloo the baby.

wow, miss amber, you are one of the bestest snoozers i know! it really is an art. :)
anywho, it's super duper nice to meet your sis miss holly! my mama's angel doggie whitney had to have that surgery to close off her ear, too, cuz she kept gettin' the ear infections really bad like and it was startin' to eat away at bone. :(

Jed and Abby in MerryLand said...

Holly is so cute! Does the ear flap cover her new ear canal and protect it? Can she jump in the swimming pool and go swimming with her ear? [We watched the Bailey video, but we can't really tell them all apart yet.] Glad to read you've figured out a good treatment in case Holly ever gets that cauliflower ear again.

Holly is very pretty too. You looks too cute all curled up trying to sleep off your hangover, oops we meant headache.

Wish we could have made it to the party. Weenie is a food hound and he could have out eaten anybody there. He likes to curl into a ball just like you did and he loves sleeping on Mommy's chest.