A Note to all me furiends from ME and da Momma who still isn't functioning very well.......

We wants to thank each and every one of you's out dere fur all da comfort and support you gave when me sissy April started her journey 'cross da Rainbow Bridge.  My last postee had over 130 heartfelt comments about April......a lot of you I didn't nose until now.  Blogville is da bestest place on Earth.

Also thank you to every buddy who mentioned our loss on their blogs.  Because of you, we met so many new furiends.

Thank you, Ann, for this beautiful badge for April. 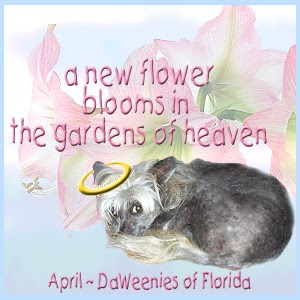 **********
Me would like to share wit all of you some flashy beast photos of me sissy on da day her was admitted into da hospital. 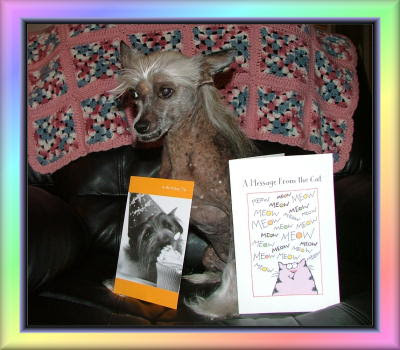 Here her is wit two cards her got.......
A special "Hugs" card from MADI
and
A birfday card from FRANKIE & ERNIE.
April 18 was sissy's 11th birfday.

Thank you, guys!  You made sissy's last days special! 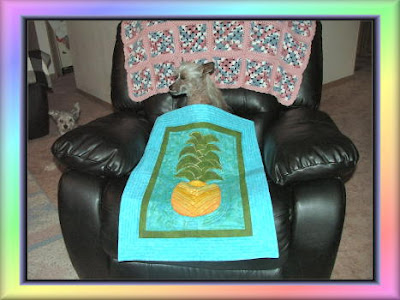 Da Momma gotted dis beautiful Pineapple table topper from Blogville's own Agnes, from
DACHSIES WITH MOXIE.
Thank you, Agnes.
Me just nose dat April and Ginger are ruling their pawt of Rainbow Bridge togedder and havin so much fun!
(Dat be Benji's head in da background) 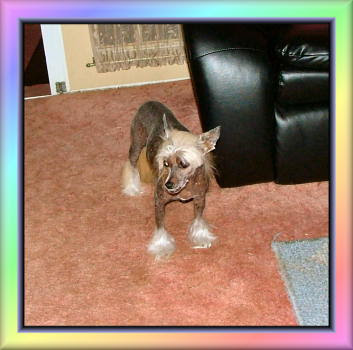 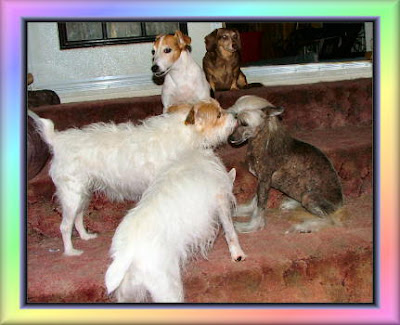 Some of the pack saying goodbye before April went to da hospital.
Jennie gave her a kiss on da forehead while Bailey and Rusty waited dere turn.  Of course ya'll nose who dat is sittin on da top step, don't ya?  Mee has to rule da kingdom Queendom from up high!
**********
Finally, dis be da very last photo taken of my Sissy April. 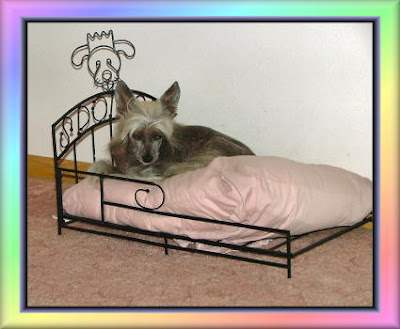 **********
Hopes me gets me assistant back soon butt da Momma is very sad right now and keeps to hers self.  So me did da best me could wit dis postee.

A Special Thank You and an Update

Da Momma Here!
Amber has so graciously allowed me to RENT her blog for today.   Payment has yet to be determined but I have a feeling I need to stock up on lots of treats.
First, I want to say THANK YOU to all our Blogville friends for the outpouring of support you have shown during this health crisis at our home involving April and Benji.  I just couldn't believe that we had nearly 100 comments on our last post from Easter.  Yesterday was April's 11th birthday and she also received so many good wishes for her birthday.
Also a big thank you and hug to April's love, UJI and Momma Tea for keeping Blogville updated on April's condition.  And I also have to send special hugs to FRANKIE FURTER and the DACHSIES WITH MOXIE for their part in spreading the word around Blogville and the request for POWER OF THE PAW to begin.  Also thank you to Puddles' Mom and Mona and Weenie's Mom for their kind and supporting words. 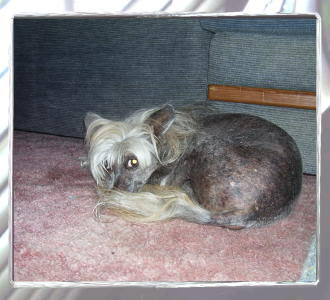 April's condition is very serious and I know I have to prepare myself that this might not turn out well for her.  I'll make this as brief as possible and attempt to "bottom line" her condition as much as possible.
Last Friday her belly appeared to be bloated so we immediately went to the vet.  An x-ray was done at that time and it appeared that her heart was enlarged and pumping fluid into her stomach.  She was given Lasex to eliminate the fluid (which it did within 48 hours).  On Friday blood was also drawn and sent to a lab for more testing.  On Saturday morning I received a call telling me that April's liver was failing and the ultrasound date was moved up to Monday.  I dropped her off on Monday morning for the ultrasound.
The ultrasound revealed that her heart was within limits so her heart condition was upgraded.  However, her liver was seriously abnormal.  A surgical biopsy was the only way to determine whether cancer was involved or if the diagnosis would remain as "Cirrhosis of the Liver".
A routine pre-surgical blood clotting test was done and revealed that April's blood was clotting too slow and surgery would be very high-risk.
So we won't be able to determine the cause of this.  The vet feels one of two things are happening.  Either there is a tumor involved or the liver failure may have happened because of the long-term medications April has taken for four years for her Inflammatory Bowel condition and also the Phenobarbital for her seizures.  During the four years she's been on medication, her blood has been tested every 6 months and was always within normal range until now.
April has now stopped all medications and is only taking liver supplements, Denosyl to aid in regenerating her liver, and an antibiotic for a newly discovered urinary tract infection.  Now we have to wait (possibly for weeks if April survives this long) to see if her condition improves.
So far this morning, she isn't doing very well.  Yesterday morning she still accepted treats.  In this picture she ate one of the treats but didn't feel up to eating the second.  Instead she attempted to "guard" it from Bailey who was determined to take it. 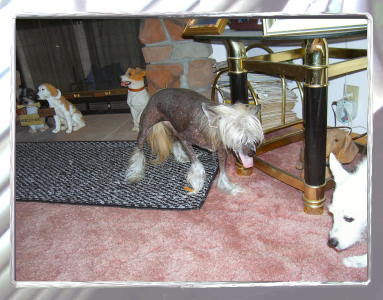 Today she just wants to sleep and won't even open her eyes.
The vet gave me some cans of a special food that we've used in the past for sick dogs (Hills A.D.).  Currently I'm spoon-force-feeding April about one can throughout the day.  She's been accepting that and at least not spitting it back at me.
**********
On another note, Benji is doing quite well for now.  We know he has terminal cancer and his time is limited, but it's good to see him enjoying life in spite of everything going on around him.  He is on daily pain meds for his arthritis and any other pain he might have, and honestly, I haven't seen him this active in years.  He loves to eat and can still jump high in the air for treats.  This picture was taken when he came home from the hospital after the cancer diagnosis.  See his leg bracelet!!! 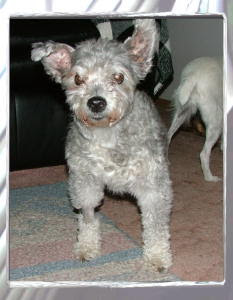 Benji really does need a bath now that his stitches have come out.
**********
The last couple of weeks have been a little hard.  April's illness hit right during our major spring cleaning/remodeling project.  I now have big boxes sitting all through the house waiting for me to go through and separate the "keepers" from the things to be donated and the "throw outs".  I was also attempting to put together an update page for my own dog website but only got as far as collecting the pictures for it.  And, of course, Amber is waiting patiently for me to do the long-promised-to-her remodeling of her blog with a brand new look!  She won't let me forget that one since we still have our New Year photo up.
(Bad Momma)
To make her feel better, I promised to include her photo in this post. 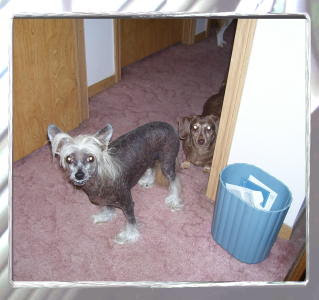 I'm sorry this post got a little longer than I intended but I wanted to pass on all the information I have.  We're definitely all suffering from lack of sleep around here and my appetite has all but disappeared from the added worry.  I apologize for not posting more often but I'm trying to spend as much time as possible with April and Benji as well as holding down the fort and helping my dear husband with the projects now going on.  I'll try to update everyone if there are any major changes....good or bad.
Thank you all again and we appreciate the continued prayers and Power of the Paw.
I do believe that if April makes it through this crisis, it'll be because of Blogville doing what it does best!
We Love You! 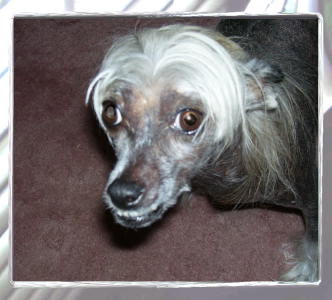 Little me was helping da Momma wit da cleaning and her accidentally stuffed me in da closet and shut da door!  So me be writin dis in da dark!
Since me is unavailable (he he he)
here be me oldest brudder
(Da one wit cancer)
DA BENJI BUNNY
to wish every buddy a very
HOPPY EASTER! 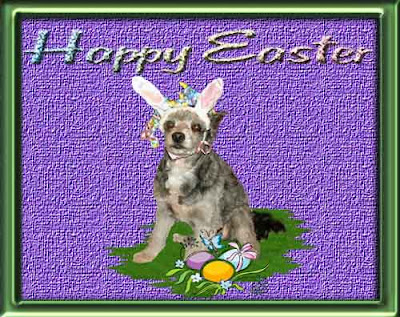 Just checkin back in wit
Every Buddy!
Hap-pee to say dat me not be da Momma's nurse no mores.  Her is finally feelin better from da bronchitis.
Her wanted me to tell every buddy out in Blogville THANK YOU fur all da prayers and good wishes fur her to get better.  Me nose it was ya'll who made hers better, and not me terror-ific nursing skills.
Also thank ya'll fur da prayers fur my oldest brudder, Benji.
His big 1+ inch deep cut is healing nicely.  If only his cancer would go away.....{sigh} 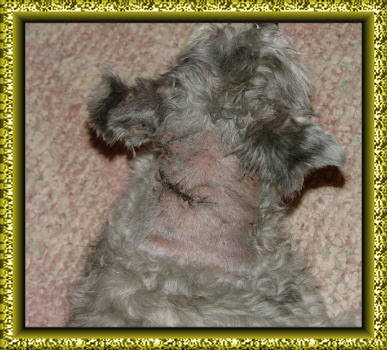 Oh...Oh...me gots to shows you me new harness dat Auntie Judy from Texas made jus' fur me!  Now me can look jus' like
Mona and Weenie
wit me new duds!
If any buddy would like Auntie Judy's email address, jus' leave me a comment and your email address and me will send it to ya so you's can be stylin jus' like me! 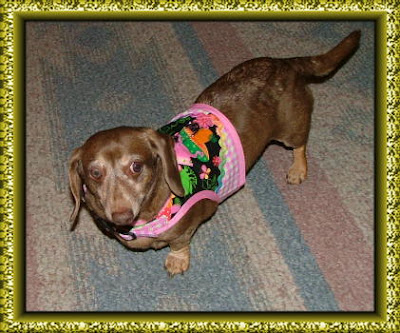 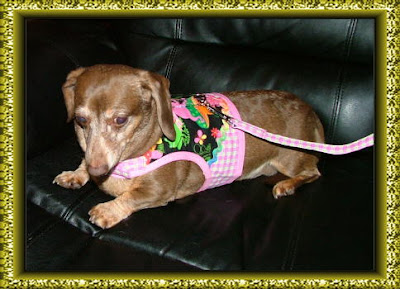 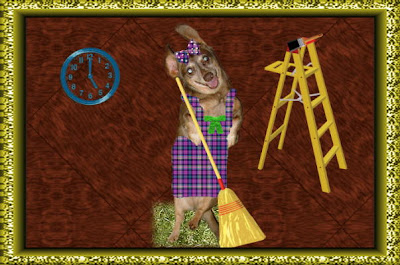