OK Mom
You know da drill.....
Roll it before I changes my mind
*********
Gee, she's getting rather nice about sharing her blog with me and her pack members.  And when Amber's nice about something, she is also up to something that I'll find out about much later.
The next member of Amber's pack that I would like to introduce is
TUCKER
Tucker is one of our rescues.  Originally, he was sent to his new home at the age of 10 weeks old.  Our daughter found out that he was tied up outside all the time and had very little interaction with people.  She was able to get him when he was about 5 or 6 months of age.  He was suffering from severe mange brought on by stress and required continuous medical treatment.  We were more equipped to care for him, so we brought him home to live with us.﻿
Tucker was born in 2002 making him 9 years old now.  He is the only short-legged Jack Russell we have in our family.  When he first came to live with us just before Christmas of 2002, he was very timid and pretty much scared of his own shadow.  We had to take him to the vet once a week to receive treatments for his mange, which had left him nearly bald and covered with open sores.  These weekly vet visits also frightened him and didn't help our efforts to gain his confidence.
In time he did come to trust us completely.  He is now one of the most loving little dogs I have ever met.  Unfortunately he does still have a few mental scars from his early abusive treatment.  We have to remember not to pat him directly on top of his head, as he still cowers when he sees a hand coming toward him.  But he loves to be scratched behind his ears now, and with a slow movement to his head, he is loving head scratches too.
Tucker also has some physical problems.  He has been tested for both Cushings and Addison's diseases but both have been negative.  He has muscle tremors frequently.  His blood has to be tested every 3 months as his potassium levels have been high on several occasions.  He is also taking thyroid medication and will continue taking this for the rest of his life.  At times he is very wobbly on his feet and also hunches his back on the days when his spinal arthritis is at its worst.  There is a possibility that Tucker may have suffered some trauma on his back at an early age.
Considering the bad start to his life, Tucker has come a long way.  He fits in beautifully with the rest of the pack and is very loving and very happy.
About a year after Tucker came to live with us, we were also fortunate to be able to rescue his brother, Rusty, who was also living in horrible conditions.  You will meet Rusty on Amber's next "Meet Da Pack" post.
Here are some pictures of our boy, Tucker. 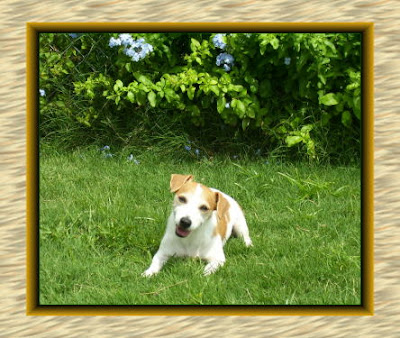 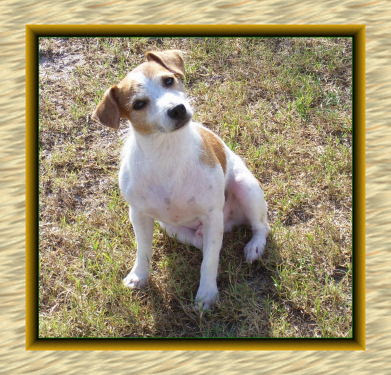 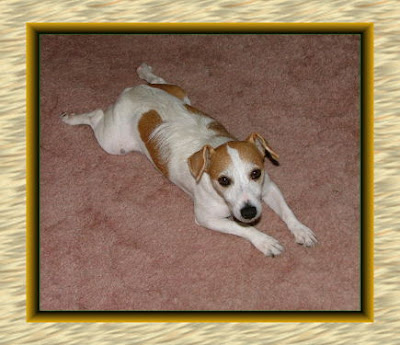 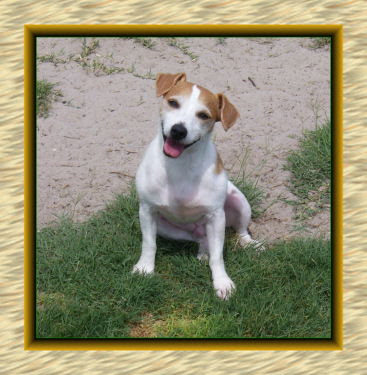 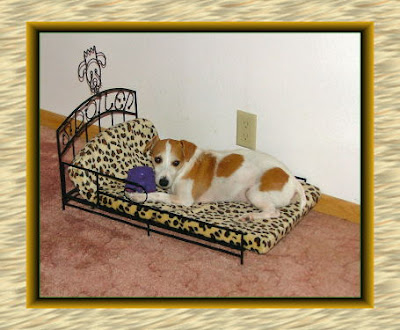 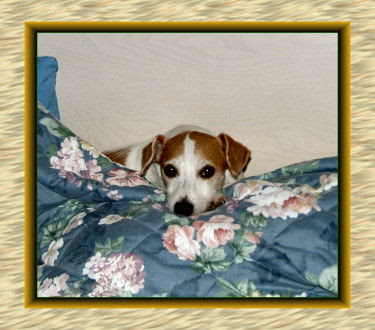 THINGS THAT TUCKER LOVES THE BEST 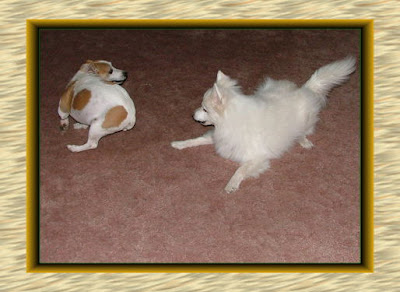 A good game of tag with his buddy, Reno 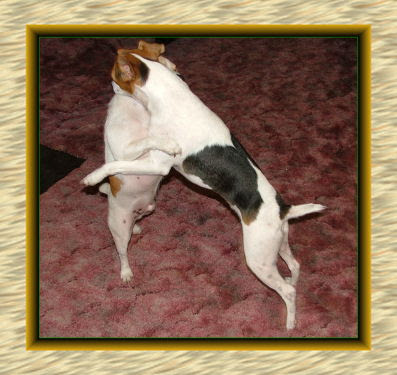 Dancing with his brother, Rusty 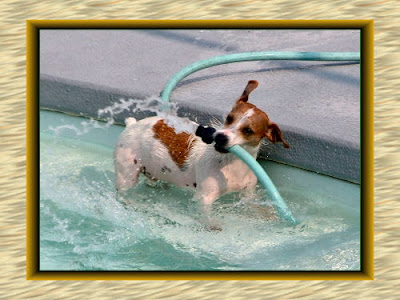 Playing with the hose
Note:  This same photo was featured on June 18, 2010
on the "Page a Day" calendar published by
Workman Publishing
***** 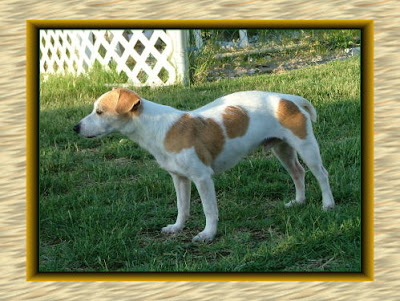 Tucker hunches his back due to spinal arthritis 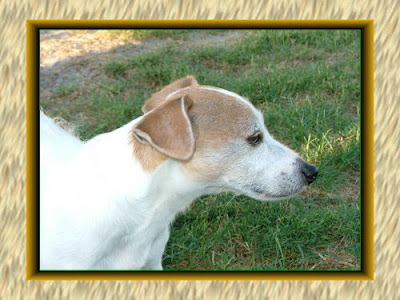 Our sweet boy is so full of love and trust now

Ok, back to our hostess,
Ms. Impatience

Mom, you are very long-winded and it HAS to STOP now
OR
I won't shares MY blog wit you anymores. 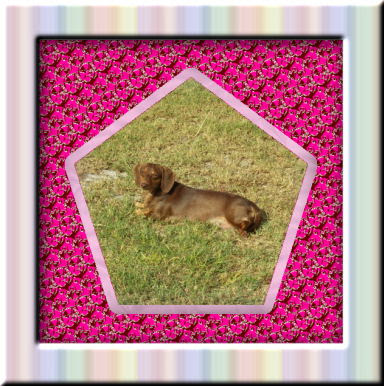 HAPPY THURSDAY
EVERYONE'S
AMBER
Posted by Angels Amber and Max DaWeenie and Mom at 8:22 AM

Amber I think you live in a Jack Russell house, you must be going crazy. Tell your Mother she needs some more daschunds like you.

Your Mom is a very nice lady to help all your siblings the way she has.

Howdy Tucker! You are one cool dude!

Tucker is a cutie pie. Love his smiling face :)

Tucker has the most expressive and beautiful eyes I have ever seen!!!

He certainly is lucky to be in such a loving and caring home.

Tucker is one good-looking old man! I LOVE that bed of his. He's so spoiled. But then again, who wouldn't wanna spoil a cute dog like him?! Thanks for introducing him to us guys. Have a great day today!

Aww.Tucker looks so sweet and very adorable I must add!! HA! Ai am glad that he has a good home and is so happy!! Yay!!

Tucker do be so furry lucky to has found his way into your home! We just dussn't unnerstand peeples. On our adopshun application we ask peeples wot they would do if'n the dog they want to adopt shows destructive behaviors. On an applicashun fur a 10-week-old puppy we akshually had peeples once write "We will be keeping him outside until he outgrows that." OMD! Peeples is rilly that STOOPID.

Lucky Tucker, and lucky you to have such a wonderful boy! I love the pic of him wrestling that naughty hose ;)

Amber: your Mom and Dad are fantastic people for rescuing so many dogs. Oh and of course you are fantastic for sharing your blog with them. :)

It's raining here today...harumph! My best friend when I was in elementary school had 3 Jack Russells. They were very well trained, but it was still kind of loud at their house at times! I can only imagine the noise level at your house.

I agree with the others, your mom and dad are big-hearted people to take in so many dogs! And you, of course, are a big-hearted Amber daWeenie for putting up with all of those pack members AND sharing YOUR blog like this!

Amber you have the sweetest looking siblings. Mom and I have enjoyed reading about each and everyone.
Tucker is very cute.
Hugs Madi and Mom

YAY, another pack member introduced!!! Mom was so excited to see all these adorable pics of Tucker, it makes her think of a pup she had many years ago, Shadow. She is even thinking now that Shadow may have had some JRT in her too. We tried to pick a favorite pic of Tucker, but they are all just so cute - we love his head tilt.

I love tucker! what a cutie!

Tucker looks like one happy and safe feeling guy! You and your family are so wonderful for giving him a loving forever home. We love his smile and little tilt of his head! Amber, your pack is delightful!

P.S. We bet YOU don't get woolly owl feet like our Nuka does!

Hi Tucker! You sure are a cutie. I am sure glad you are safe now. I sometimes cower when someone pets my head, too. I have been with my family for 10 years, but early scars stick.

Ambew
I hope you had a lovely sun baf!!!
Thank you fow letting youw Mom pawson tell us about Tuckew.
Despite his tewwibull stawt in life, living inyouw pack has put a bootiful , happy smile on his face. I know he is basking in youw family's love and that helps him get thwoo all his pwoblems.
I'm so happy you wescood him!
smoochie kisses
ASTA

Tucker is adorable!
Not very nice start of his life but I know now he is super duper happy!
Kisses and hugs
Lorenza

Jed and Abby in MerryLand said...

We're loving getting to meet all of your family! Abby, also a rescue, does not like people to reach out to touch the top of her head. You can pet the top of her head only if you gradually work your way up from scratching her ears. It gladdens our hearts to see such a loving family and so many happy puppies. And thanks for including your angel siblings, too!

Tucker, you are such a cutie-pie and I'm so glad that you were rescued from that bad situation. I love your pics and such a sweeet face!!!

Tucker is absolutely adorable!!! LOVE the dog bed!!! And the hose picture!! Hoses can be fun!! xoxo Chloe and LadyBug

OMD, Tucker is adorable! So are you, Miss Amber!! Hehehe. Love the peektures, he looks great! I'm so happy for him that he found the most PAWFECT furmaily for him!

Tucker's come a long way. And what a beauty!! Loved all the pictures.

Thanks for letting us meet Tucker, Amber.

Tucker is absolutely adorable! We're so glad he's got a loving home now! And he's a famous calendar model - wow!

Nubbin wiggles,
Oskar (who's not holding your warm weather against you)