I losted my Inner Nut again.  It was down for
24 loooong hours!  Da house lights kept dimming too.
Mom saids we was havin' a BROWN OUT
Butt
I would radder has a COOK OUT!
I says da SUN SPOTS was causing da
BROWN OUT
*******
Now I is gonna let Mom have dis
postee for only a couple minutes to
introduces you to my next pack mate...
RUSTY
*******
Ok, Ms. DaWeenie
Go watch your sun spots or sun flares or whatever!
Our next furry friend sharing our house is
RUSTY
Rusty is Tucker's brother who you met on our "Meet Da Pack -- Day Seven Post.  Rusty was also a rescue from a bad situation but he didn't join our family until almost 2 years after Tucker came.
Rusty was nearly hairless from a mange condition, much the same way as his brother when he first came to live with us.  He was obviously very mistreated.  There is a section on his tail where the hair never grew back.  It's very possible he may have suffered a burn on his tail to cause this condition.  But he isn't talking about it.
Rusty is now 9 years old.  He is one of the most loving dogs I've had and seems to have forgotten his past.  His only problem is his fear of rain, storms, loud noises, etc.  He has actually become our barometer.  The sun can be shining brightly without a cloud in the sky.  If Rusty starts trembling, we know that it'll be raining within the hour.
There are two things that Rusty lives for:
Squeeky Toys and Swimming
And...can this boy ever swim!
I was sitting outside on the deck one day while Rusty was doing his laps.  He swam for 45 minutes back and forth, occasionally hitting the water with his paws and then trying to catch the drops.  Finally after 45 minutes I got tired watching him and called him out.
This video is one of the best although it's about 3 years old now.  Rusty's brother, Tucker, is swimming with him.  Tucker has some health problems now so I don't allow him to swim any more.  He's only allowed to play with the water hose.  The two other dogs who appear occasionally in the video are Serena (the Min Pin) and Angel (Powderpuff Chinese Crested--April's sister).  Sadly Serena and Angel are now at the Bridge and greatly missed.
Hope you enjoy the video of our future Olympic star!
Here are some additional pictures of our boy. 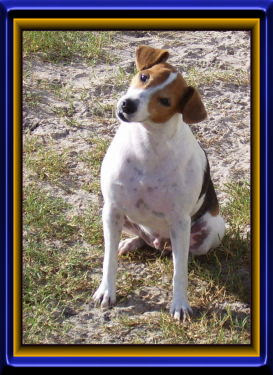 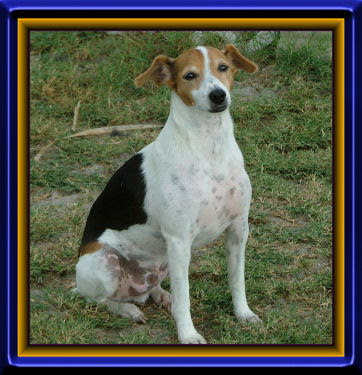 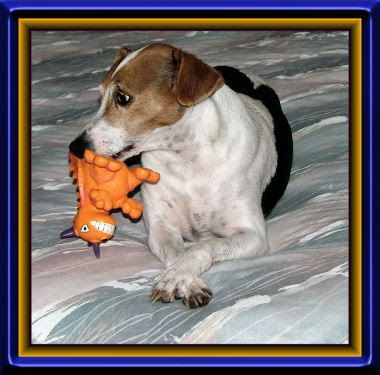 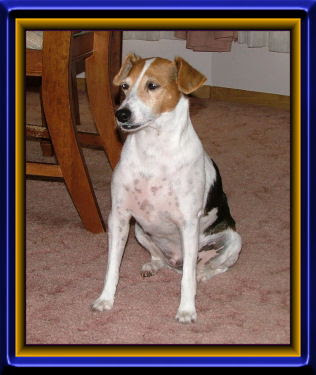 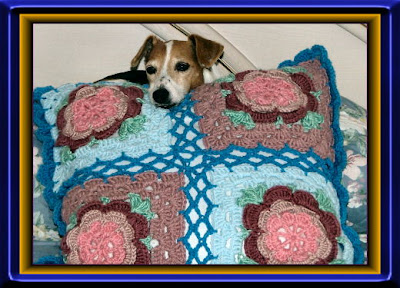 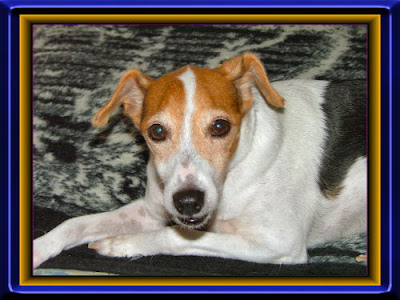 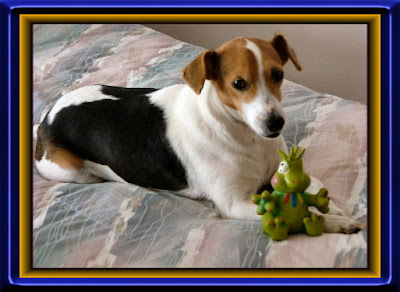 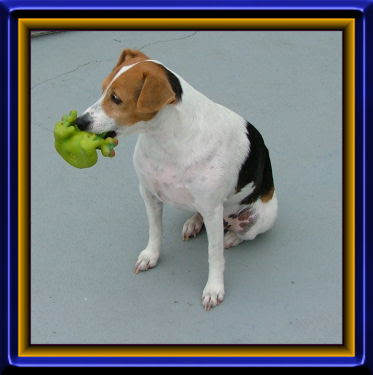 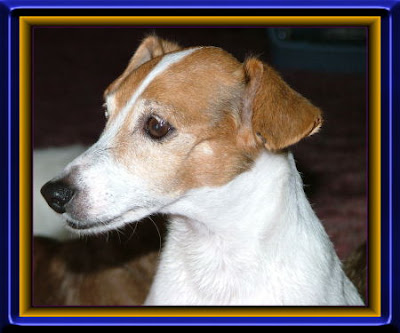 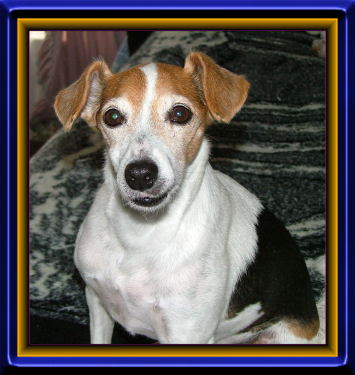 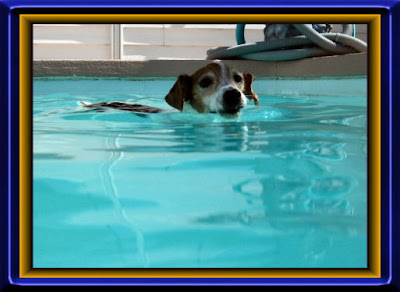 I has one last announcement tingy!

Mom just finished anudder Update page for her web site, All the Dogs in My Life.  You can drop by and visit it by clicking
HERE 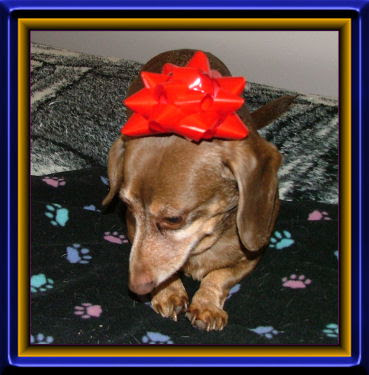 AMBER
﻿
Posted by Angels Amber and Max DaWeenie and Mom at 7:00 AM

Hi Rusty! You are a most handsome boy! Mama's first dog when she was a kid was named Rusty. He was about your size, but all brown and a little longer fur.

I absolutely LOVED da video but I still find it very weird to see dogs enjoying da water so much. You 'll nevers get me near water on my own free will.

Rusty is so handsome and I'm so very happy you rescued him!!!

Thank you Amber for allowing your mom to tell us about handsome Rusty. We enjoyed reading his story. Wow! He is a great swimmer, he would surely win if he were in a swimming contest. You just look so cute with tat bow atop your head. Hugs and nose kisses

Rusty! You is a regular Mark Spitz dog!!! My momma was enjoying your video sooooooo much,her eyes were leaking. Especially when Tucker came to swim with you!!

Ummmm Amber I think that your pawrents have an addiction to Jack Russel type small dogs. Your pack seems to be overrun with them. You will need to get them some more doxies I think!

Rusty sure is handsome! We can't believe he swam for 45 minutes! I (Elyse) get tired after swimming for about 5 minutes...and he was swimming fast too! I would love to get Riley in a pool, but the beach and lakes have to suffice for now because I don't know anyone with a pool!

Too bad about your inner nut (AGAIN!). We're glad it's working now though! :)

Rusty seems just like MY kinda Guy... except fur the swimmin, of course. hehehe

Amber, it is so nice of you to let Mom introduce us to your pack. We loved watching Rusty in the pool - he is a great swimmer, we have never been anywhere that we could swim, and we often wonder if we would like it.

All the photos of Rusty were great - but we sure love the head tilt one.

Have a great weekend.

We came back to tell you that the new page on Mom's site looks great. Very nice job, Mom.

Rusty is handsome and so well adjusted...a tribute to the love and security he feels in your family! We think your family is awesome to give so many homeless and needy pups a chance at REAL life!

Please tell mom thank you for the poem. It touched us and made momma cry with happiness. She is going to print it out and hang it by YoYo's bed.

Wow, Rusty sure does get excited about swimming. What fun.

Amber...Rusty is one handsome brother and such a good swimmer. You my sweet little friend are surrounded by lots of loving peeps and siblings.
Happy Weekend, Madi

Nice to meet you brother Rusty! Amber, you look lovely, as always.

Rusty is so cute. I love the picture where he has his head a little bit on one side like he's listening really hard.

Oh, my, Rusty is a cutie! And a lucky boy - his very own swimming pool. We would like that! We have to swim in a mud hole!

Wow- it sure looks like you had fun swimming!! =)

And absolutely, yes, next time I'm in Florida, we're coming to stay at your house! ;)

Thanks for posting my house badge on your bloggie, doggie! That there is a little rhyme I made up just for you!

you are my kinda doggie, dude!! squeaky toys 'n swimmies are the bestest thingies evarrr!! can i maybe come over 'n swim in your pool with you? we don't have one of those at my house. anywho, i love when tucker got in the pool with you cuz it looked like you were doin' synchronized swimmies! heehee!

pee s -- miss amber, you sure do make a nice pressie. BOL!

Wow Rusty you sure are a good swimmer and we are the same age. too.

Happy Mother's Day to your Mommy.

AWWW isn't he a handsome!

Rusty is a great swimmer!!! Amber...you have a wonderful family!! xoxo Chloe and LadyBug