TODAY DA MOMMA WILL GET DA FULL CONTROL OF ME POSTEE.
ME DON'T LET DAT HAPPEN VERY OFTEN...JUST FUR VERY SPECIAL POSTEES!
GO MOM!
*****************
Cancer is a terrible disease, one that rarely shows any mercy.  We have probably all had some dealings with it in one way or the other.  Our human family has been very fortunate and hasn't been directly affected by cancer.
However, over the years we have lost five members of our canine family to cancer.


Today I would like to remember our five brave dogs and introduce them to you.  If you have any time and would like to read their entire stories on my personal website, the link to their individual story is embedded in their name.

The first dog we lost to cancer was our dear
SAMANTHA
Samantha had both liver cancer and a brain tumor.  The brain tumor took her life. 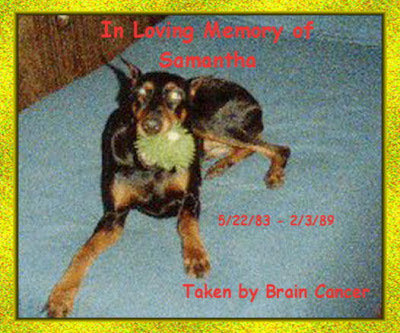 *****
SABRINA was our second Doberman lost to cancer.  She began her journey to Rainbow Bridge on her 6th birthday.  Liver cancer spread to many parts of her body but she never complained until the very end, nor had any symptoms, leaving us in shock when we got the diagnosis. 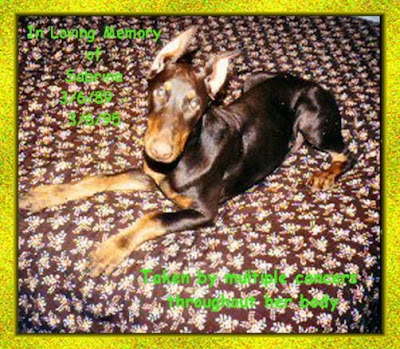 *****
In 2003 we lost our TIFFANY after a nine-month battle with Hemangiosarcoma cancer. 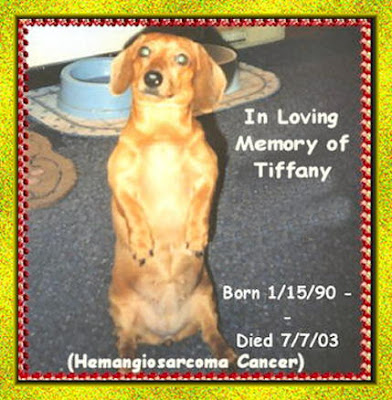 *****
Our sweet SERENA was diagnosed with congestive heart failure and then developed osteosarcoma (bone cancer) in her rear leg.  The cancer spread to her shoulder but the vet was able to successfully remove the tumor on her shoulder.  She was not a candidate for amputation due to her bad heart.  At about the same time that she developed cancer, she also became blind.  One night about 7 months later I told her it was ok to leave for the Bridge if she had to and that I would be OK.  She passed away quietly about 15 minutes later when her heart just stopped beating.  I believe to this day that she was waiting for me to tell her I would be alright before she could leave. 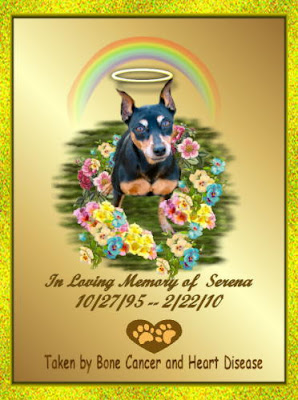 *****
Our most recent loss was TUCKER.
There were no symptoms until one day he started coughing.  The emergency clinic we took him to first believed he had pheumonia and found the tumor in his lung by way of an x-ray and biopsy.  We had to let him go exactly one month after the diagnosis and four chemo treatments. 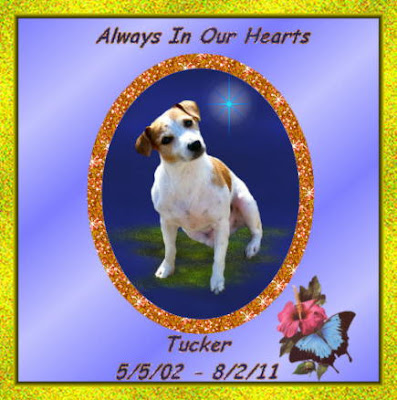 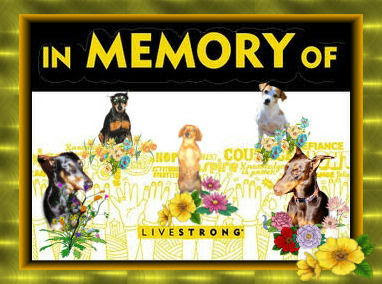 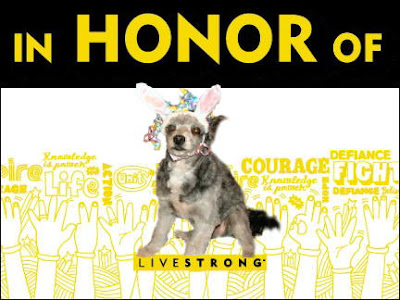 Benji is our very silly boy who has proven to be a fighter.
He was diagnosed with cancer in March of 2012 and given only 2 months to live.  We are now entering his 7th month of survival.  We know this cancer will eventually end his life, but we're happy and thankful that he has the willpower, courage, and strength to fight as long as he can.  His age is against him as he is going on 17 years old.  This in itself is a true inspiration to all who know him and especially to his family. 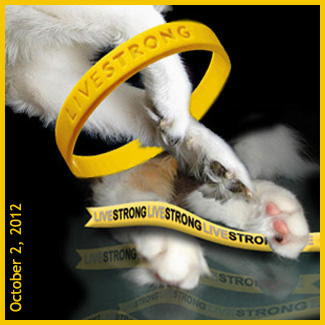 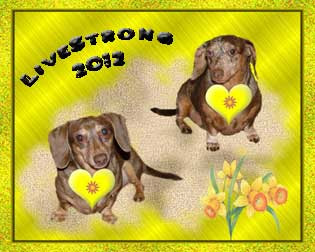 We Love You!
DaWeenies of Florida

Posted by Amber DaWeenie at 6:00 AM

Dats is a most beeyootifuls posty Amber, wee has read all ovs da doggys in yor Moms life stories wivs Da Momster who gotted leaky n smiles ats da same time. Wee knows how horrid da C monster can bees wee has seened wots it has doned to our Momster butts her says dats her wood rava it wos her dat gotted it den some likkle hu-peeps n it is jus one ovs dem fings dats happens. Yoo can chooses to fites it or lets it win . Dere wos no way it wos gonna win ova our Momster, her is skary-some wen her wants to be .....BOL

Beautiful.... Yet heart breaking at the same time.

Thanks for your words of kindness with my losses so close together!!
You are a brave soul!!!
I don't think I want to lose another so I am not going to get another dog maybe a kitten one day after the hurt has passed some!!! I have only lost one dog from cancer back in the 70's. Since that time I have feed my dogs a lot of greens and maybe that has helped.
Thank you for your kind words!!!

Dear sweet Amber ... you and your
Mom have created a beautiful and touching post. We are saddened that you've endured so many losses
and we purr and pray for your
brother Benji.
We also send warm thanks and hugs to your Mom and your family for
all the kind words and thoughts sent to us as Poppy Vic fought his battles with cancer ... your support has meant a great deal.
Love,
Ann
Maggy and Zoey

we are purrin for Benji.... and we know that those who have gone before are proud of you for carrying on.

We LiveStrong today and purr and pray for an end to this horrible disease.

purrrrrs to all those you honored.

Awwww such a beautiful tribute to these gorgeous woofies! Take care
x

A beautiful tribute to those taken by cancer.

so sad to read about the friends we have lost but what a lovely way to remember them. thinking of our furry loved ones this morning!

What a beautiful post! It had me in tears, you've had so much loss. What a trooper Benji is. This was such a lovely tribute to your angels. :)

Thanks for all your kind comments and prayers for my Freddie. :)

Such a beautiful post Amber. Prayers for Benji too.
Lovies, Miss Mindy

Wow, this dreaded C has taken so many of our beautiful furiends. Hoping every day for a cure.
Grr and Woof,
Sarge, COP

Just a beautiful postie Amber!!
Terriable C has taken too many. One day..NO MORE!!

That is such a great tribute to all your doggies. Cancer is a terrible disease.
And we sure are sending many woofs and purrs to Benji. He is a fighter.
Loved this post. Take care.

So nice of you to let your mom have your blog today. She wrote a ver touching, bittersweet post. I had no idea you had lost so many fur-babies to cancer. Tragic. They are all heartbreaking stories but Serena's story made us have watery eyes. So sorry for all your precious losses to such a horrible disease.

Benji is truly and inspiration, both in age and his fighting, courageous spirit against cancer. Benji, my paws are crossed very tightly for you to win your battle. Keep up the great work!

Lovely post to get the word out and hopefully a cure will be found.

what a beautiful post _ with loving tributes! Cancer is horrible and none of us are immune. Prayers that a cure or end to this horrible disease is soon found!

What a beautiful yet sad post. We pray that c will be a thing of the past one day soon.

Love ya lots,
Mitch and Molly

What a nice post! And beautiful dogs, every single one of them!! My first dog, Scooter, had what the doc thought was cancer and she had to go to the bridge just a week later. It was one of the saddest weeks of my life. God bless you for remembering these sweet angels!

You have certainly had more than your share of the evil of cancer. Hate is a very strong word, but we truly hate cancer.

Incredibly powerful words! We are proud to stand beside you in this fight to end the evil c and we were honored to Walk last Sunday with the spirits of all 6 of your Mighty Warriors. Thank you for sharing them with us. LiveStrong

That was a wonderful post, although so very very sad that you've lost so many canine family members to cancer. I'm glad that your Benji is still fighting and happy. He makes us all proud.

I wanted to write a post like yours but my day spiraled out of control. I lost my grandmother and mother to breast cancer, and now three dogs to various cancers. What an awful disease. Indeed, we all need to live strong against it.

That is a beautiful post and tribute. Cancer is evil and it needs to be gone forever.

Amber, this is a very meaningful post and we are so very sorry to hear that you have lost many of your family members to this dreadful disease. We join you in supporting this very important cause. xoxo Chloe and LadyBug

Dawling Ambew
Youw bootiful post made Mommi get all teawy youw bwave and wondewful fuwwkids will always stay in youw heawts, but I hate that they had to leave so soon. I cwoss my paws and pway that little Benji can keep fighting..he is bwave and wondewful and will tell you when it's time, and not befowe I hope that's a long way off
smoochie kisses
ASTA

We're all teary here. What brave doggies they all were, especially little Benji, who is just defying his age and prognosis. Cancer is horrible!

Sending a fresh batch of Jetty kisses and JJ hugs to Benji the Brave.

We lost my sweet, golden sister, Koko, to spleen Cancer last September. Thank you for such a beautiful tribute to your family members taken by this horrible disease.

I'm so sorry for your losses, those dogs are so special and beautiful, and each loss is painful. I know you'll never forget them. I'm glad so many people are working hard to fight cancer for people and dogs.

That was sure a beautiful post. We must defeat the evil C. It doesn't fight fair but I believe that together we can whip it!