In Loving Memory of Sarah Ricca 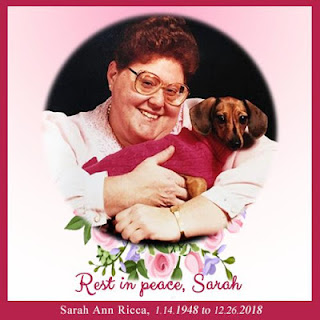 When A Rescuer Arrives At Rainbow Bridge
Author Unknown

Unlike most of the sun-filled days at Rainbow Bridge, this particular day dawned cold and gray, damp as a swamp and as dismal as any day could be imagined.  All of the recent arrivals had no idea what to think, as they had never ever experienced a day like this before. But.....the animals who had been waiting for their beloved people, knew exactly what was going on and started to gather at the pathway leading to The Bridge..........to watch.

It wasn't long before an animal came into view, his head hung low, so very low, and his tail dragging. The other animals, the ones who had been there for a while, knew what his story was right away, for they had seen this happen far, far too often.  He approached slowly, very slowly, and was obviously in great emotional pain, but with no sign of injury or illness.

Unlike all of the other animals waiting at The Bridge, this animal had not been restored to youth and made healthy and vigorous again.  As he walked toward The Bridge, he watched all of the other animals watching him. He knew he was out of place here and the sooner he could cross over, the happier he would be.  But, alas, that was not to be.  As he approached The Bridge, his way was barred by the appearance of an Angel who sadly apologized to him, and then told him that he would not be able to pass.  Only those animals who were with their people could pass over the Rainbow Bridge.

With no place else to turn, the animal turned towards the fields before The Bridge and saw a group of other animals like himself … the elderly, the infirm, the sick… They weren't playing, but rather simply lying on the green grass, forlornly staring out at the pathway leading to The Bridge.  And so, he took his place among them, watching the pathway and waited.

One of the newest arrivals at The Bridge didn't understand what he had just witnessed and asked one of the other animals that had been there for a while to explain it to him.  "You see, that poor animal over there, with the others, they are rescues. He was turned in to rescue just as you see him now … sadly, he never made it out of rescue and passed on with only the love of his rescuer to comfort him as he left his earthly existence.  Because he had no family to give his love to, he has no one to escort him across The Bridge."

The first animal thought about this for a minute and then asked, "So what will happen now?"  "Watch, and see," said the second animal for he was about to receive his answer …

Suddenly, the clouds parted swiftly, and the gloom lifted with a mighty wind.  Approaching The Bridge could be seen a single person bathed in a golden light.  Then a whole group of the sick and older animals also was bathed in the same golden light and restored to youth and health.

A group of animals broke away from those waiting for their families, came to the pathway and bowed their heads ever so low as the person neared closer.  As each bowed their head, the person offered them a pat or a scratch behind the ears.

Then, one by one, the newly restored animals fell into line behind the person and followed towards The Bridge… and they all crossed Rainbow Bridge together.

"That was a Rescuer. The animals you saw bowing to the rescuer in respect were those who found new homes because of some rescuer’s work. They will all cross over The Bridge when their forever families arrive.  The others you saw restored were the ones who never found forever homes, who were too old or sick when they arrived in rescue, and died there.  But, when a Rescuer arrives, that person is allowed to perform one, final act of rescue. They are allowed to escort all those poor animals across The Rainbow Bridge to heaven.”

"I think I like Rescuer's," said the first animal. "So does God," was the reply from the second animal, "so does God…"
Posted by Angels Amber and Max DaWeenie and Mom at 7:22 PM

We are very sorry to learn of her loss.

That's an incredibly moving tribute. I wish I had known this wonderful soul.

The Johnson Family and Abby Lab

What a beautiful tribute to Miss Sarah♥

That was such a beautiful tribute. We were very sad to hear about dear Sarah.

This is the first time I have read this story, beautiful. I am not sure if my tears are for Sarah, for all those like her, or for all the animals who crossed the bridge that special day, that special time ... when the rescuer came to walk with them.
No, I am sure.
The tears, not of sadness, but of joy, are for them all.

It is always extra sad to lose a human blogger. Sarah left a lot of friends behind, furry and human, and will be greatly missed. She was a great example of how to be positive in a painfully hard situation.

We shall miss Sarah tremendously. She was such a wonderful and loving friend.

Sarah truly made the world a kinder, more loving place. Hope she is surrounded by all her babies across the bridge. Rest in peace, dear friend.