HAPPY MONDAY
BLOGVILLE
HOPE YA'LL HAD A GREAT WEEKEND!
***
Furst all of us want to say a very special
THANK YOU
to the CROSSED PAWS GROUP
Mayor Frankie Furter
JD, Max, and Miss Clare
Pip
Oskar
Puddles
The Slimmer Pugs
Minna Krebs and her Crew
Dis is da list of members dat me has.
Pleeze lets me nose if dere be more cause me wants to thank dem too.
We all gots a big box of goodies from dem last week.  It was mostly for Tucker (who da paws are crossed for),
BUTT
we all gots to enjoy everyting.
(Tucker wikes to share)
Da Mom was on paw wit da flashy beast to catch all da goings on. 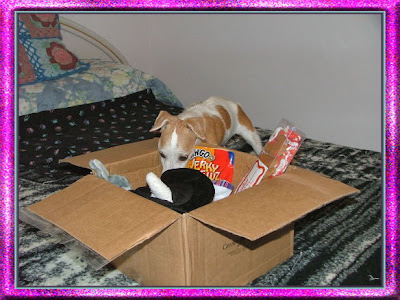 Oh boyz...is dis all for me?
(No, silly, you gots to share)
Da brudder Max (DaOdderWeenie) was da furst to help Tucker unpack his box. 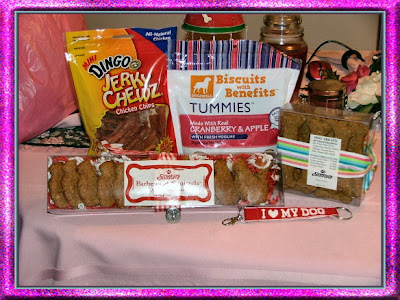 OMD...Jus' look at all dese tings to eat! 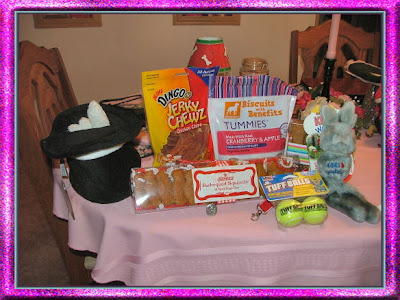 And toys too!
OMD
OMD
And even a couple of really nice tings for da Mom...
A nice chain so she don't lose her keys anymore and dat will always remind hers dat she LOVES HER Dogs...and a wonderful medal to watch over us.
We be so LUCKY to have such wonderfur Blogville furends. 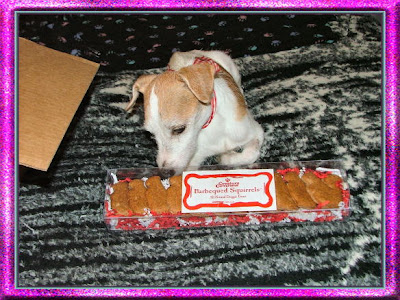 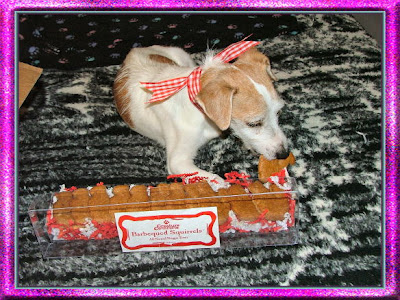 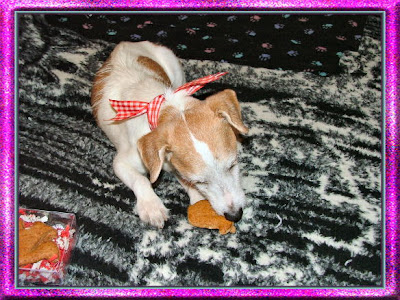 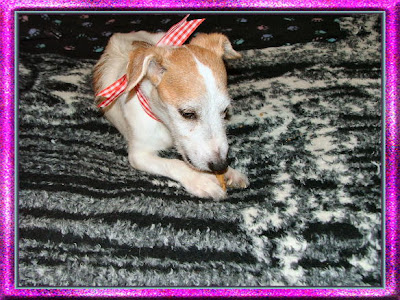 And even some nice tooty frooty bones too! 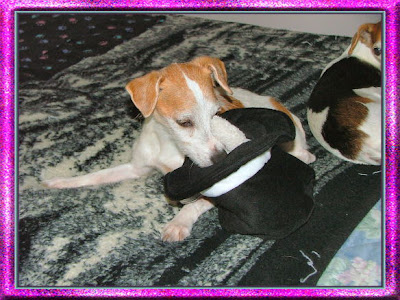 What goin on in dis hat?
(Nose, you can't haves it,  brudder Rusty..it be all mine) 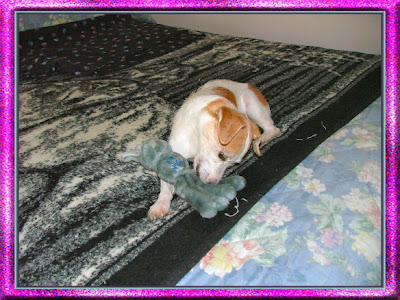 Me wuvs me new Wubba! 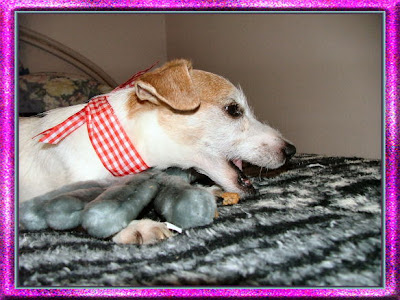 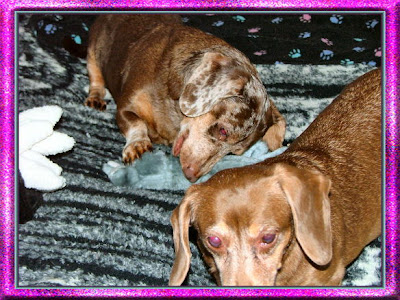 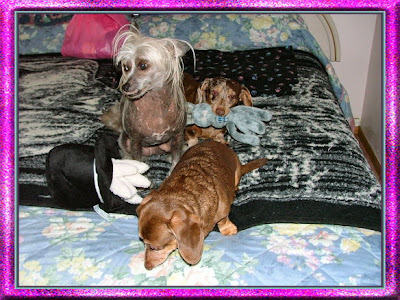 Hey, gives me back me stuffs!!! 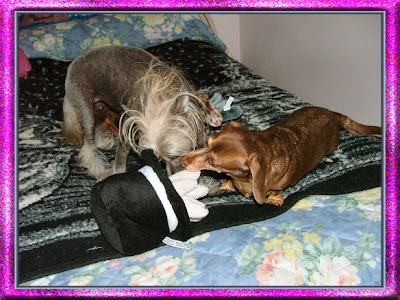 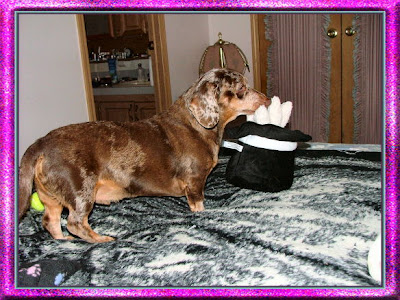 Max....my HAT wit da fingers!
Gives it back to ME! 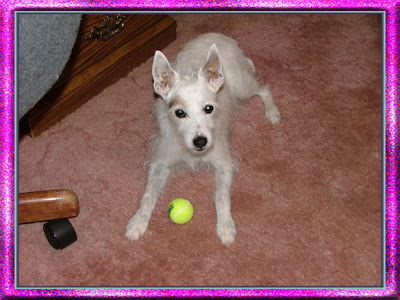 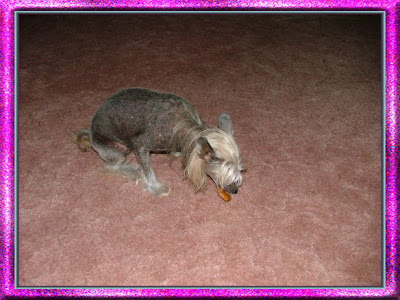 April....my BBQ Squirrels!
Give dem back! 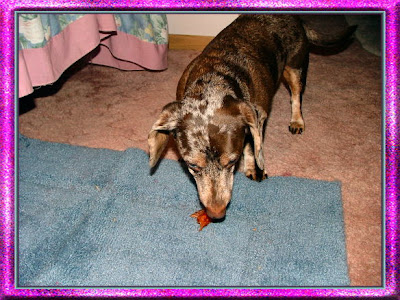 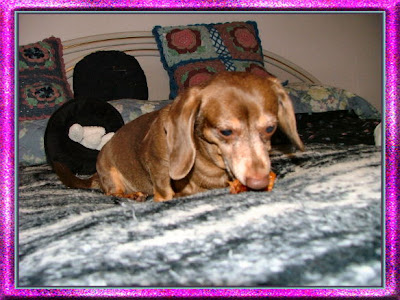 EEEEEEEEEK!
What goin' on here? 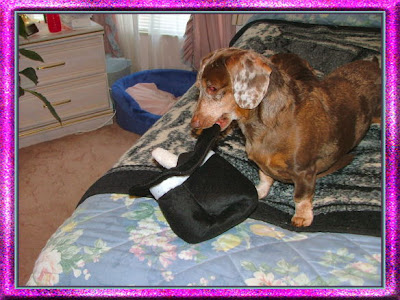 Max, you only gets to BORROW my hat! 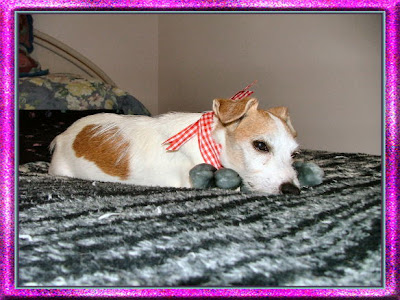 All dat gots me a wittle bit tired. 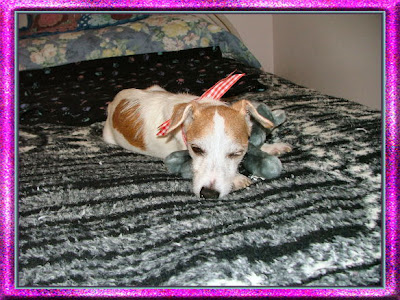 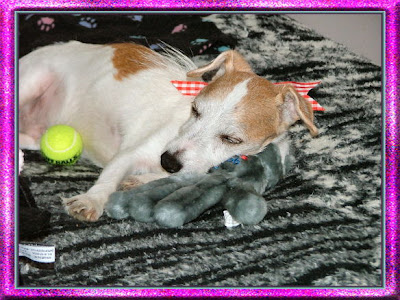 Gone!
(Jus' for a wittle while)
***************************************
Da Momster will takes over now....we busy!
﻿
Well, DaWeenies and the rest of them are all having fun with their presents so I guess I'll take over from here.
Tucker went in for his fourth chemo treatment on Friday.  They also took new x-rays to see what the tumor was doing.  Unfortunately, the news isn't too good.
The primary tumor is a little bit smaller...that's the only good news.  The bad news is that there are numerous smaller tumors beginning to form throughout his lungs.  The oncologist who is treating Tucker said the only option was to change the chemo drug and see if we get better results.  This drug would be given every 3 weeks instead of weekly.
We decided to go ahead and give it a try.  It was either that or just give up and I'm not ready for that just yet.  So Tucker received the first dose of the new drug on Friday.
Things are looking pretty bad at the moment.  Even though Tucker seems to be breathing a lot easier now, he has stopped eating and is going downhill rapidly.  The reason for this could be one of two things.  The tumor has taken over and we are now looking at the end getting that much closer...OR...the change of the chemo drug has made him sick.  I'll be discussing this with the oncologist this afternoon.  In the meantime, Tucker is comfortable and sleeping most of the time.  He is drinking lots of water so that much is in his favor.  He hasn't eaten anything since Saturday morning and seems like he's losing a lot of weight.
Please keep him in your prayers no matter what the outcome of this turns out to be.  I keep hoping he'll suddenly wake up and be hungry again but in the back of my mind, I know this probably won't happen.
I want to thank everyone for their kindness and support and a special thank you to the Crossed Paws Group.  The pictures I got of Tucker the day he received his wonderful gifts may very well turn out to be the very last pictures I'll ever have of Tucker enjoying life.
Hugs and Love to All...
Mom

Poor Tucker - we will keep crossing our paws for him and hope that it is just the new meds doing their work that is making him feel so poorly.

That was so very nice of that special group to do for him. There really are some of the nicest peeps and pups and other furries out there.

There are two day in every week we should not worry about Yesterday and Tomorrow! This leaves only one day – today. Live one day at a time ~ You have The Crossed Paws Gang and me to saying prayers.
Sweet William The Scot

The Big Bad C just stinks! We has seened furstpaw wot Tucker be going thru but he be so lucky to be with a famblee wot lubs him. We has takened dogs out of the shelter with the Big Bad C coz their peeples had dumped them there coz they did not want to deal with it (can you beleef that, grrrrr) and the dogs stayed with us fur their lastest days so they had at least some lubbins in the end. But seeing Tucker with his noms and toys and BBQ SKWERREL, OMD just warmed my heart!

What a wonderful package from the group. Obviously, they all had fun with the contents, especially Tucker. These will be photos and videos to treasure but we hope Tucker will have more time for fun with the pack.

Our paws are crossed for Tucker - to be comfortable and pain-free, one day at a time. We love you guys!

Dear Mom, Tucker and Amber and crew...we so very much enjoyed watching Tucker have such a good day he looks very happy and really enjoying that moment. One thing for sure you have some very precious pictures of the crew together. Purrs and prayers to you all, Madi and Mom.
PS
On my fountain...my favorite thing to do is to drop milk carton rings into my fountain and splash them around. MOL

Ohhhhh to all of you I send lots and lots of purrrrrrs and love. I know how difficult it is when a pet is not doing well. Hoping you get some better news when you talk to the doctor.

Dear Ones.. All, I am so very much glad that you got the pressie package and that Tucker.. and everybuddy Else got to enjoy everythingy.

I have my paws crossed that whatever the Bridge has in mind for Tucker.. will be gentle and loving.

Thank you soooooo much fur taking and SHOWING us the super pics and videos of Tucker.. having a grrrreat time. We will ALL treasure them.

My sisters and I are all sending sweet Tucker lots of purrs and prayers. It was wonderful seeing all those terrific pics with the goodies.

What amazing people.
We will keep you and your family, fuzzy and not, in our prayers. *hug*

Sweet Tucker we are so happy to see you enjoying all your nice presents the wonderful people sent to you. We are sorry to hear that you are not eating and growing weaker though. We are praying the new chemo works and you will bet all better. Praying for all of you and this difficult time Hugs and nose kisses

Good to see you having fun with those awesome new toys! We are thinking of you everyday and have our paws crossed for you. Be strong, buddy!

Hi Amber! It is nice to meet you too! Today is the day to comment for a chance to win a prize! Also your comment will equal 25 cents being donated to a shelter.

Keepin yoo all in our hearts , prayers and forts

I am glad that these gifts lifted all of your spirits for a minute.

We are keeping all of you in our prayers.

Hi Amber! We awardified you. Please visit our blog to get your award. Thought you could use something happy.

What wonderful pups to send Tucker such a thoughtful pick-me-up...and it did! Please know Sweet Boy, that we send our most powerful White Dog positive energy to keep you strong and painfree and aware of how much you are loved. It is our hope that the lack of hunger is from the chemo making you feel icky and that the vet can prescribe something to make your appetite return. Woos of comfort and care to all.

We are all so glad that Tucker enjoyed his package!!

Here's hoping for some improvement......hope da new meds help!! Hang in there Tucker

Love and hugs,
MinnaK and Crew

Oh dear Tucker, I am so happy to see you enjoying all your new pressies. These are lovely pictures and you look so peaceful and happy.

Enjoy every moment! My paws are crossed tightly for you and your family.

I heard about Tucker on one of the blogs and wanted to come over to send purrs and purrayers from Chloe and Cecil.
Also sending tail wags and healing licks from Winston.

All paws are crossed and I will keep you in my prayers!
Shawn

Hello Amber, Mom and the rest.. My heart hurts so much for you all and dear sweet Tucker. What wonderful blogging friends.. I didn't even know there was a Crossed Paws Group> What wonderful hearts!! I really enjoyed looking at these pictures and the videos. I will be praying for you all.. Please give Tucker a big heart-felt hug for Gracie and me. Love to you..

Our thoughts and prayers are with Tucker and your whole family. He looks so happy with his presents, thanks so much for the wonderful pictures and videos.

We were gone from Blogville for a little bit and had no idea of the ugly 'C's attack on Tucker.

We have crossed all paws here and are sending comfort vibes his way.

What a great package the Crossed Paws Group sent and how wonderful that Tucker is enjoying his pressies.

Hope Tucker is feeling better...glad that the toys cheered him up a bit. Prayers are being said for you all. xoxo Chloe and LadyBug

As Mom to a very special Tucker myself, just seeing the words Tucker and tumor and oncologist together in the same sentence was enough to give me a pit in my stomach, so I can only imagine how YOU must be feeling. Please know that you and Tucker will both be in our thoughts and we'll be crossing paws and purring for him to fight through this. Meanwhile, it is lovely to see such beautiful pictures of him having such a fun time investigating all his presents. He clearly knows how to live life to the fullest no matter what, and that's a lesson to all of us.

Please know we're thinking of Tucker and have our paws (and fingers, toes, etc) crossed for Tucker!
~Milly, Shelby, and the Mom

You're so lucky! Those squirrels look so good! I'm so sorry to hear about Tucker, I'll be thinking of him. Please enjoy your time with him and show him lots of love.

So sorry to hear about Tucker's health. We will keep him and you in our prayers.
What a super pressie package. You have wonderful blog furiends :)

Paws crossed that adorable little Tucker bounces back! You all are in our thoughts. Looks like he got a super nice surprise pressie package from your furiends that perked him up! Take care.

Aww, Tucker! We sure hope this new chemo drug helps out and that it is what is causing you to lose your appetite, and not something more sinister. You got some wonderful presents in the mail and that was so nice of you to share with your pack!

Paws crossed for you!