Run out to pee, grab a jerkey and a comfortable seat because this is it!
The story of the horror of my life at my pad over the last 18 months.

Yes, furiends.  You's heard me right!
18 MONTHS
it took of living in horrid conditions not fit fur a tree rat.

AnyHoo...
I will show you's some pics from START to ALMOST FINISHED...in date order...and since it took so long, (and me don't want you to get butt sores from sittin too long), I will have 3 days to show you the BEFORE pics.
The next round of pics will be on
WEDNESDAY
followed the the last of the BEFORE pics on
FRIDAY!
So please come back and lend me your paws to hold. 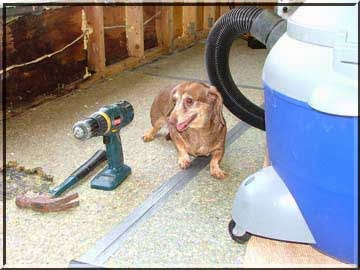 This doesn't look too good.  Something BIG is going to happen! 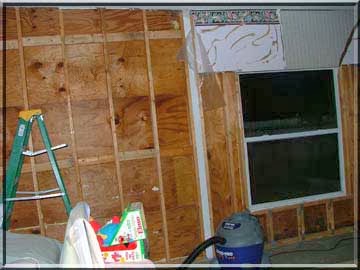 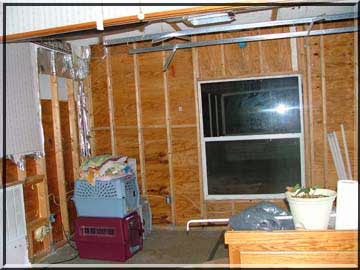 Where did my pretty wallpaper go? 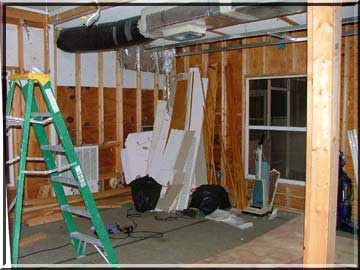 Come on, Dad!  What are you doing? 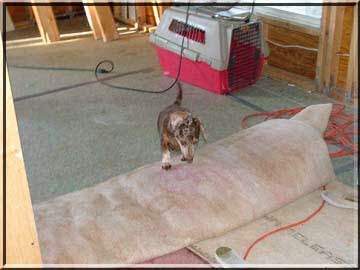 Brudder Max (DaOdderWeenie) is trying to figure out where his old smelly carpet is going... 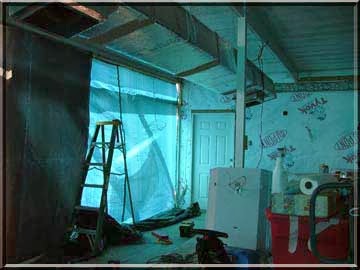 The walls are falling down! 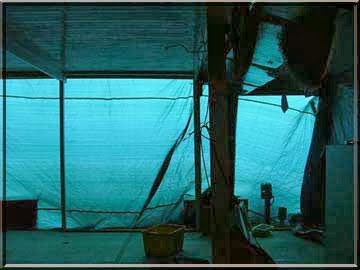 Me's living under TARP!  YIKES, this is scary! 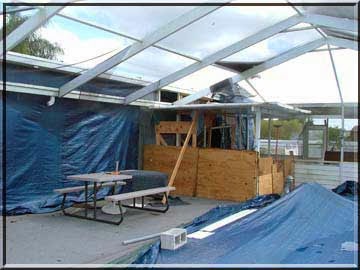 My pad from da outside! 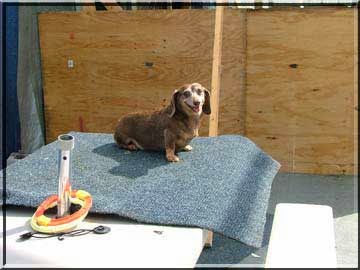 Nothing much to smile about, butt me will try anyway! 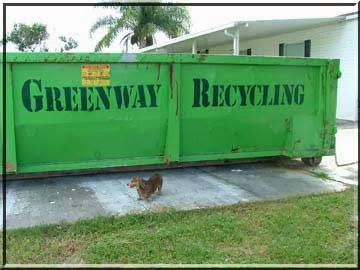 Maybe I should just jump in and end the pain! 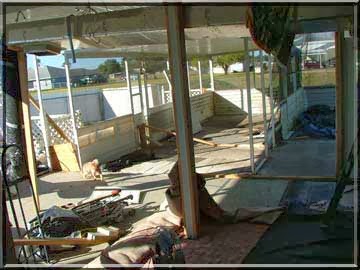 Dad, you's makin' such a mess! 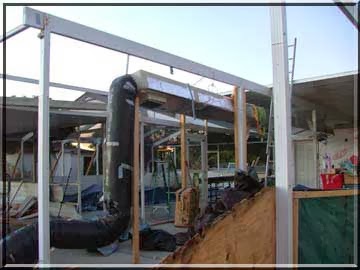 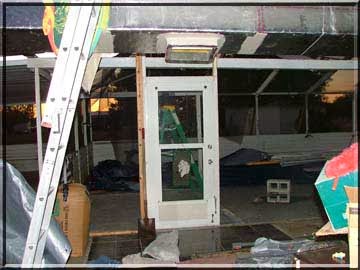 And now this is the door to no where?? 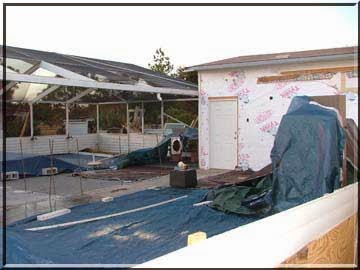 Finally the construction company comes in and starts putting in the re-bar poles! 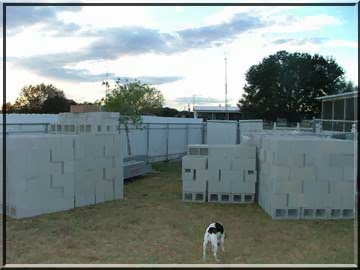 All these big blocks were delivered and my brudder RUSTY (RIP) checks it out.  Where did my yard go? 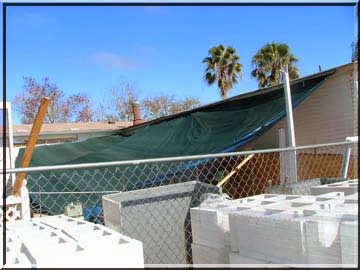 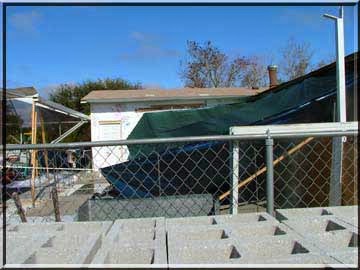 Trying to live under a plastic ceiling is NOT my idea of fun!
Hap-Pee it wasn't cold in Florida in December of 2012. 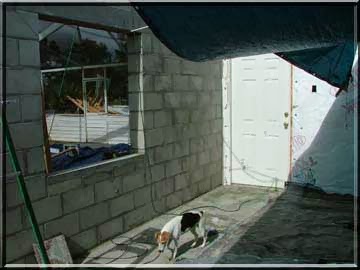 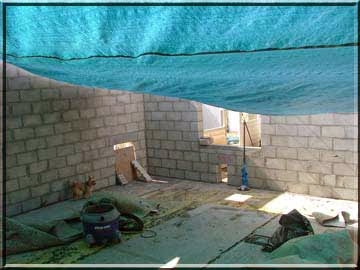 And see my wittle door under da window!
It be just fur ME!  WHOOPIE! 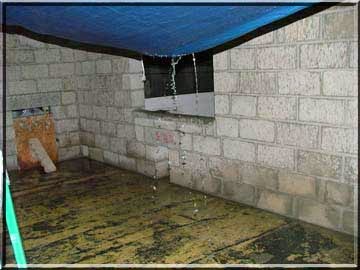 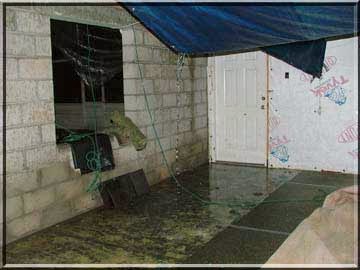 Pleeeze come back on
WEDNESDAY
after me dries meself off to see da next phase of me
HORROR!

Posted by Amber DaWeenie at 6:00 AM

That is certainly major construction, but I am confused as to where your old house ends and new construction begins. Can your mom help you with a short paragraph of what happened next time? Does your house have glass ceilings? My estate often has construction, but nothing like that.

Beautiful Amber and adorable brudder Max!! Awwwwww - we just love that you both helped at every stage of this sequence! My goodness - that is SOME mega construction - can't wait for the next bit!!!! Yay! Take care
x

OMD that was some major work. We too look forward to the next bit. Have a marvellous Monday.
Best wishes Molly

Omd! I was laughing all the way through the tour! Hilarious, Amber! I think the raindrops falling on me head was one of the funniest comments! I needed this laugh! I'm thinking this is your folks new house? or new addition?

Oh and the pic where you said, "Nothing much to smile about, butt me will try anyway!" cracked me up! You certainly have to fake it til you make it! bol

You're right, it's a good thing you don't live in cold country! What a lot of work. Did you get paid for snoopervising?

Amber, had we ever thought it was going to be THAAAT BAAAD we would have had you come live with us ... OMD how did you survive you poor little lady. So hap-pee it is over now ...

Oh Amber, that looks like a giant project. But I'm sure with your helping paws your humans can finish your new crib.

Oh thats going to be a big room fur you. Love that you have your own private entrance built just for you.
We'll be back to see the next post.

HOLY GWALK A MOLEY.... THAT is fur SURE a big pawject. We remembered the pictures where the tarp came down and raindrops were FLOWING on the FLOOR.
We are glad that you are giving us some time to Rest our EYES between bouts of his horror.
We are also glad that the work is nearly completed.. BRAVO on THAT.

All we can say is your Mom deserves a BIG medal for putting up with that! My Mom would be bald from pulling all her hair out :)

Amber I am amazed that you and your siblings didn't stand on the curb with your legs out looking for a new home! We had our kitchen gutted in 2006 Mom sent me to live with my Grandpees for a month (they lived 2 miles from us).
As Arnold says, 'I'll be back'!!!
Hugs madi your bfff

Great dawg, Amber...they didn't even take it down to the studs; they took it ALL down! I cannot wait to see more.
Happy Monday,
Oz

I agree, y'all have been so busy and we can't wait to see some more results!

We'll be back for sure. WE love seeing all the pictures even though it is a chronicle of your horror...

Have a great day.

The Furries of Whisppy said...

We would have been very nervous if we had to live under a tarp ceiling....

All we can say is
OH MY DOG!!!
hugs
Mr Bailey, Hazel & Greta

Hey Amber!
Wow, this is so exciting! I bet this has been one huge big challenge. Sorta looks like camping...kinda...
Can't wait to see more!
Grr and Woof,
Sarge, Pol Comm

Wow, that looks pretty extensive. That's a lot of effort just to get rid of a pee stained carpet :)

WHY AMBER in pugheavens name did you and brudder MAX not hop on the first transport out and come live with us during this trying time in your life...why????????????
stella rose

PEE S..... have you heard anythingy from GIZMO lately??? We Miss him.

Wow - this is a HUGE job! We can't wait to hear more and see more, Amber!

Love ya lots♥
Mitch and Molly

Oh my gosh that is a lot of work. And I give you credit. We hate work being done in our house. Way to keep it together buddy.

Oh. My. Goodness. I can't wait to see what happened in the end!

Wow! That is more than just a little remodel...that is a whole new dog house! Hang on Amber, it's gonna be GOOD!

Amber, I will cross paws that this will all be done soon. I know it will be pawsome. Keep dry and warm my sweet pals.

Wow that looks like so much work. I bet it looks really nice now.
Sue B

Woah!!! That's some craziness there!!
~Milly and Shelby

18 months... I understand. It took my brother-in-law three years to complete the house we're living in, and it has certainly paid off.

Can't wait for the next phase of Horror.

WoW!! Dis is da start of some major construction, now unto da next post!

OH MY DOG! You has to puts up withs so much! If I were in your position I woulds FREAKS out completelys!
I thinks ya doing verys well considering.
see ya next time whens you've dried offs.
Big wet kisses,
Enid