If ya missed Pawt One and Pawt Two, you can see dem here:

Thank you, sweet girl...
Our house was originally built in 1992 when we moved from Michigan to Florida.  We had our garage attached to the house from the back, rather than the side.  This left a big open gap right in back of the house from where the garage ended running along the back part of the house.  So we decided to enclose this area with screen and make it into a large screen room.  We found over the years that the screen room was pretty much unusable because of the way all the sand (we have sand instead of dirt) from the yard blew into the room.  On a windy day, the entire room was full of sand.  So about ten years later John decided to take down the screen and put up aluminum siding and windows to keep out the sand.  This still didn't work because now the room was excessively HOT all the time and we still couldn't use it. So about five years later John decided again to tear the room down and build it using plywood and drywall and get a large window air conditioning/heating unit.  But the window unit didn't work either because the room was so large (25 feet x 40 feet).  So we invested in a second central air conditioning unit.  This worked out OK until the plywood walls started warping and leaking, along with the roof.  It was obvious that we had to do something else as too many leaks were popping up with each new rainfall.  The carpeting was pretty much ruined as you can see in some of the pictures of the old rolled up carpet.  (Looks like pee stains, but it's actually from the leaking ceiling).  So, in the spring of 2012, we decided to take another plunge and hire a construction company to build a shell made of cinder block.  John had to completely tear down the old room before the construction company moved in and built the shell in the late Fall of 2012.  After the shell was finished, John finished all the rest of the work by himself (with the help of the pack, of course). The entire process took 18 months to complete.  Hopefully we'll never have to change anything ever again.  I don't think I'd survive this a fourth time!   ☺ 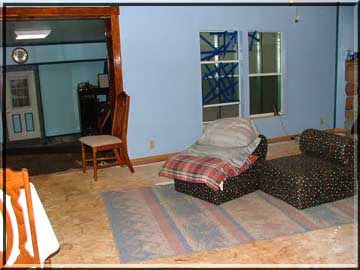 Moving on to da rest of da house.  Da old carpet is torn out, all da furniture is taken out, everyting is packed into boxes, and da painting begins. 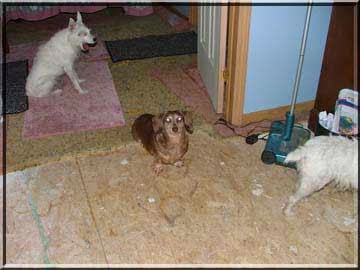 Bailey not very hap-pee sissy.  Me tinks her is crying. 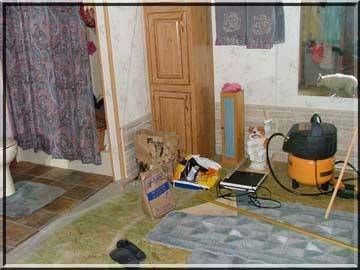 Used to be a BIG round spa tub right here.  It was never used in 22 years because da hot water heater was stingy providing hot water to fill it.  So....out it went to da front of da house.  Didn't take long fur someone to stop by and take it to a new home.  At least it got rescued from going to da dump! 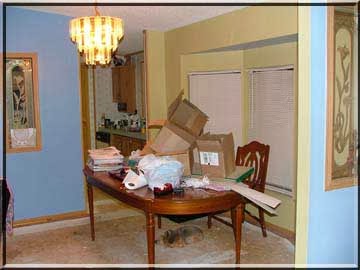 More boxes to pack!  Hope me don't get packed too. 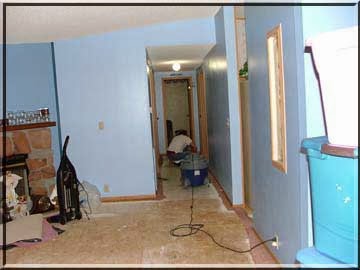 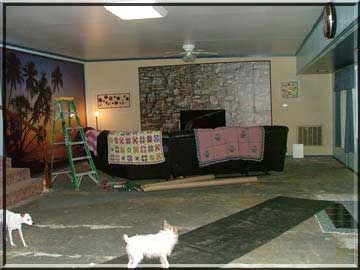 Da big sofa (da pack likes dis one cause we's can all sit on it while da pawrents sit on da floor) was da furst to be moved down to da new room.  Still no carpet down dere yet though. 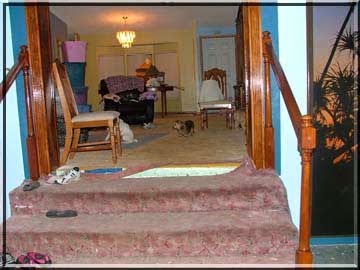 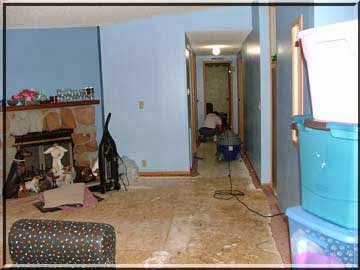 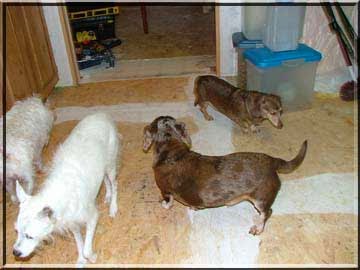 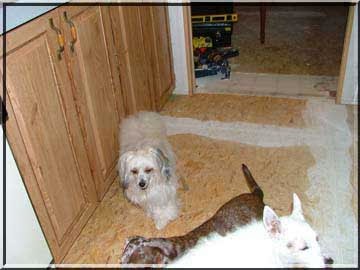 We be so confused! 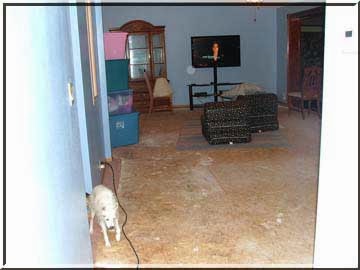 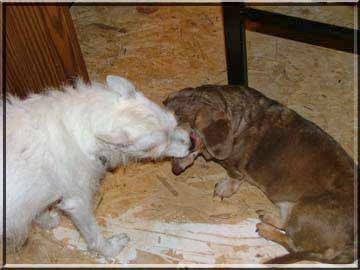 Don't cry, Amber.  Sissy Bailey will take care of you... 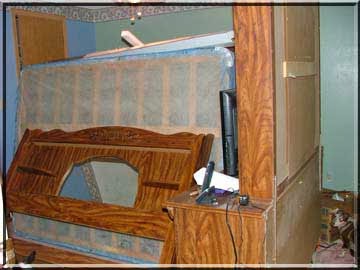 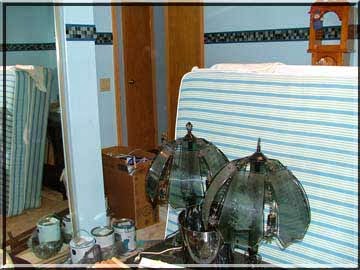 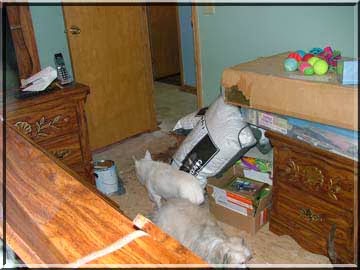 How can Mom and Dad let us live like dis??? 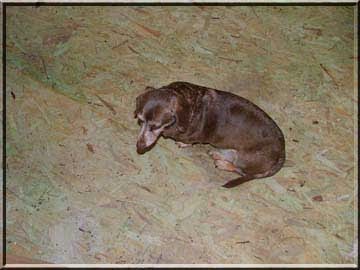 Some buddy, pleeeze end me misery...
Me keeps gettin tacks on me butt from dis bare floor.. 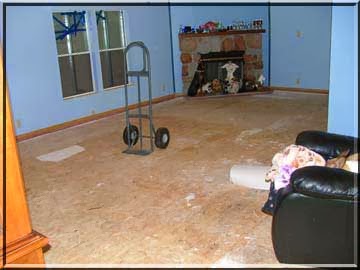 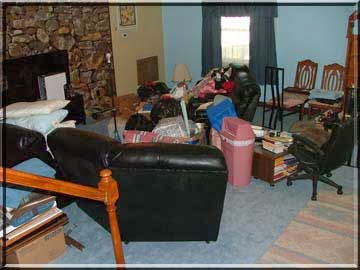 Da big new room is da furst to get a floor blankie....butt look at all dat mess from da rest of da house.  YUCK! 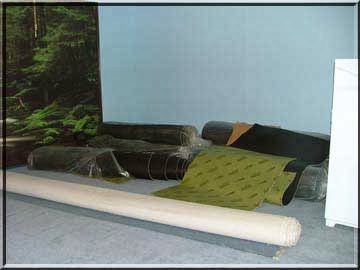 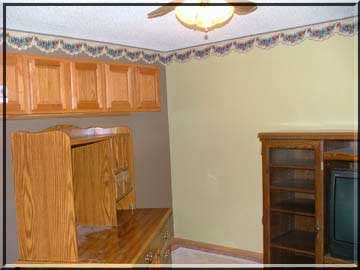 Me puter been missin fur more den a month now..
:( 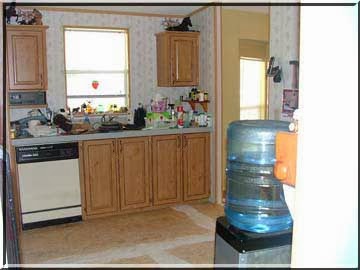 Da HOLE house is torn up, even da place where me food and water should be.  Hope dey ain't gonna be missin a month too..like da puter! 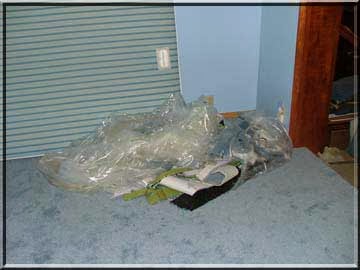 Me nose you's eyes probably purrrty sore by now lookin at all dis horror, so me quits fur now and lets you's have a weekend to rest up.

Da Horror Story ain't so horrible in da final episode.
It finally be FINISHED
(well, almost except for Mom still havin a few boxes to unpack and put away).

See Ya Next Week!

It's like you are getting a whole new estate!

Wow that was a lot of work and mess. Now we can't wait to see the final result. We know it is going to be good. Have a fabulous Friday.
Best wishes Molly

This has been quite a Pawject. Mr. John and your mom would NEVER have gotten it done..WITHOUT all of you helping them so much.
We are very much excited to see the end result.

You've been SO brave going through all this!! I hope you got lots of extra treats to keep your spirits up during the process.

My parents can't even get a wall painted in that amount of time, maybe your dad needs to come up here to freezeyourassville and finish it up for ours mom.
stella rose

What a project your dad and mom did! I can understand how confusing this would be to the pack-not sure where to go. We will be moving in May or June and I don't know how Hunter will handle it. WE have to put extra fencing up to keep out any wildlife from our yard. I can't wait to see the finished project; I'm still packing boxes and giving things away.
Wags, Noreen & Hunter

What a huge amount of work but it's really shaping up, Amber! We can't wait to see more!

Love ya lots♥
Mitch and Molly

Almost done! You bet we will be back to see da finished project!

O~la la Everything is looking so pretty and new.
My Mom said she would come help with clean but her broke the broom.
Can't wait for the next chapter.
xo Cinnamon

Your mom's explanation helped a lot. What a great room. I can't wait to see it finished next week!

We're just gonna hold our breath until we see the finished room! Oh, that's gonna be a long time, maybe we should breathe a few times inbetween.....

The Adventures of the LLB Gang said...

We can't wait to see the finished house Amber...We bet it was well worth all the work!!!

OH MY word Amber I don't know how in the world you all stayed sane for 18 months. Bless your heart we know the finished product is wonderful though
Hugs madi your bfff

That looks like so much work. I be it looks great in the end.
Sue B

Believe it or not, my brother in law built his house from the ground... of course, he had to demolish the old house... all those marble tiles... sigh... Anyway, it took about 3 years to finish. LOL

Glad it's all over.

Amber DaWeenie
I am a very cute, 15-year-old blind Weenie dog who loves to eat and sleep. 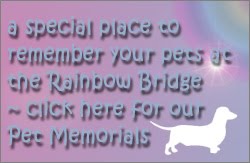