A Special Thank You on Thankful Thursday

Mommy is gonna try to visit all of you and say thanks for all the POTP and prayers fur my sissy, Holly, if my InnerNuts will work long enough.

As you can see, I'm very busy sticking close to my sissy in case she needs me. 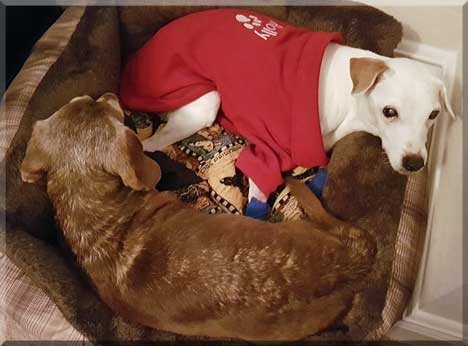 We arrived at the vet's office this morning at 7.  The first thing they did was take some blood.  It seemed like it took forever before we were able to see the vet.

Earlier this year Holly was having a blood test every two weeks because she was rapidly losing weight and had virtually no appetite.  Each blood test produced liver function results that declined with each test.  After the third decline, the vet said everything pointed toward liver failure or even possible liver cancer.  Holly is nearly 17 years old so we weren't going to put her through a liver biopsy to find out exactly what was going on.  So we decided to just let her live out her last days in peace and love with her family nearby.

It's been 6 weeks since that tearful day at the vet's.  One morning Holly woke up and just decided she wanted to eat again.  I started out slowly by feeding her canned food with a spoon.  As days went on, she started eating by herself.  She was eating dry kibble in the morning with an occasional scrambled egg and sausage patty.  In the evening she would eat 2/3 of a pound of FreshPet fresh food.

Then there is even better news.  Her pre-surgery blood test results came back.  Both of her vets were amazed!  (There are 8 vets at our new clinic and it's open 24/7).  Her liver has somehow repaired itself.  It's not completely back to normal, but very close to it.  At least the liver cancer diagnosis is no longer on the table.

It was decided that the infected lump on her hip was probably a wart and not a tumor.  We're not having it sent out for testing because Holly is too old for any kind of treatment.  The vet feels whatever it was, he got it all out.

So Holly is left with a pretty zipper that will come out in ten days. 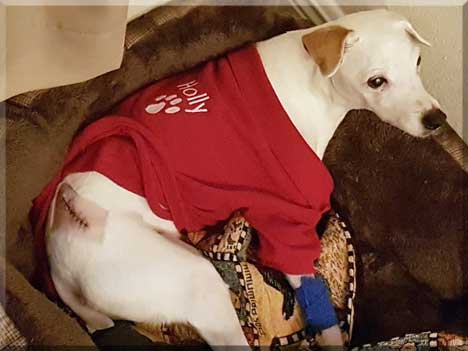 It's been a long day and nearly midnight as I'm writing this.  Holly wasn't released until 9 tonight.  She ate some dinner and is now sleeping peacefully with Amber by her side.

I thank all of you for your support and I also thank Ann from Zoolatry for that beautiful badge made for Holly.

I'm also thankful that my Internet provider cooperated and actually let me finish a post without cutting off.  More about our Internet problems here later on.

Amber will be back soon.
Blogville is the greatest place on Earth!

Posted by Amber DaWeenie at 1:00 AM

I#m so grateful that the power of the paw was strong enough for your beloved Holly.... we still cross all paws and fingers for you ;o)

The Ladies of Beaglebratz Manor said...

Mom Kim here - oh that all sounds so great - glad to see Holly improving after doing the opposite for so long. Glad to hear to that your Internet is behaving - at least so far. My monitor died on me a few days before St. Patrick's Day and it took about a week to replace it.

Lady Shasta is continuing with her POTP and I am sending you more prayers and healing vibes that everything will calm down a bit now.

we are glad to come to read this happier news about you Holly!
The cozy cottage cats hope that you will heal soon and not have to wear the cone of shame...so do not bite at your stiches...
Kitty nose kisses to you and Amber from Miss Hope!

This is such wonderful news to wake up to! Take good care of your sissy, Amber!

Hailey and Zaphod and their Lady said...

So happy to hear. We continue to send our POTP.

This is good news. i'll be purring for her to get all better. The power of hte purr and prayers is pwoerful. We're pulling for you Holly.

Such good news for Miss Holly. We will keep our paws crossed that she heals quickly from the surgery.

We're SO glad Holly's surgery went well and that her liver is doing better! It's nice to have some good surprises sometimes. :)

It is so good to read this news this morning. Keeping prayers going for sweet Holly. Love, hugs and nose kisses

So glad to hear this news! We hope your precious girl continues to do well for a long time.

We're so glad to hear your dear Holly is doing better.

Oh, and we cockers know about those lumps and bumps. We get lots of them when we're older, and they're almost always benign. We fostered an older cocker once, and he was covered with all kinds of little lumps. We thought no one would want him because of that. But his new family loved him warts and all!

Glad you are hanging in there Holly. We send healing vibes for your zipper
hugs
Mr Bailey, Hazel & Mabel

So happy for this wonderful news!

Well, that is very good news all around. Holly is a fighter at 17 - hugs to her and all of you.

OH HOLLY... we are SOOOOOOO happy to see and hear that you are BETTER. We love your stylish ZIPPER...
We know that Amber is taking Excellent Care of you.
We are sending MORE POTP Crossed Paws and Prayers. To help KEEP you on the Road to Recovery.

So Happy That Holly is doing better and that the surgery went off with out a hitch!!!! Sending tons of POTP from all of us here at POTP!!!!
Luvs
Marty and the Gang

We are so happy to hear that Holly is improving! We will continue to send along prayers for her strength!

OMD, this is the bestest news EVERS!!! I am so happy to hears this gurls! I'll be sendin' lots of POTP your way to gets even stronger and lots of AireZens and margaritas!!!! ☺
{{{hugs}}}
Kisses,
Ruby ♥

HOOOOOOOOOOOOOOOOOOOOLY THIS IS WONDERFUL AND OMDs you can tell all your friends you got a tattoo and they will just all be so jelly!
Hugs and lots of purrs for you sweet girl
madi your bfff

We continue to send the POTP from our corner of Virginia that the good news continues!

Alasandra, The Cats and Dogs said...

We are so glad things are looking up for Holly. We are sending more POTP that things continue to go well and that she continues to enjoy good health and lots and lots of healing purrs for her.

We totally believe in the Power of Prayer and thank God for the miracle for you little girl!! We're simply thrilled to hear this news. We'll be keeping you both in our prayers for her continued healing.

Molly and my Mom @The Fast and The Furriest

Oh, my, I have been so behind this year with a lot of family issues (deaths and illness) and I'm so, so glad to hear Holly's miraculous turn-around! Stay strong and healthy, sweet girl. You are an inspiration. Mom, I bet you could use a few hugs! <3

I have a bunch if those warts too...and at almost 15, I too decided I didn't want no more noms...so then the vetman realized Ihad some kind of yuckies in my intestines...and well, he meds for that made me even sicker. But after some tweaking and good care form my petcretary and my kitty brofurs and truckloads of pawyers and POTP, I am almost back to normal. I lost about 1.5 pounds, but I think shortly that will correct itself.
I am so glad *you* are feeling evfur so much better too. Sorry I did not know that you were in need of serious POTP.
You look to be a sweetie! Are you also a JRT?

Awe bless Holly's sweet heart... that is wonderful news!!! Glad you are taking such good care of her, Amber. Love to you all :-)

Yay! We are just now checking back into blogs after like 2 years away. We are so glad to hear she is feeling better!
Love, The MilShelb

Happy Easter to the DaWeenies remember Easter is the only time of the year when it's perfectly safe to put all your eggs in one basket.
Sweet William The Scot

We are glad to see Holly doing so much better and is at home relaxing. Hopefully, with some rest, everything will be fine. Thanks for sharing the update. Have a wonderful rest of your day.
World of Animals